South of the Border: Side: an Extraordinary Novelist from the Sweet Grass Hills 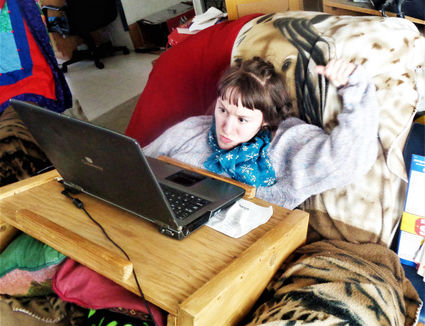 Twenty-two-year old Mariah Eide, of rural Whitlash, is shown composing on her laptop computer using an "eye mouse." Born with cerebral palsy that affects use of her limbs, she uses the "keyboardless" technology and her eyes to select letters to print. She completed her first published novel, "The Wild West," in December, 2016. A second novel, "Hidden Memories," was published this fall.

South of the Border, Column No. 39

Columnist's note. The postmaster in Whitlash pointed me to a poster in the post office. The poster shows a photo of a young woman posing with a copy of a small book. The book is the first novel she wrote, "The Wild West," and published in the winter of 2017. Mariah Eide lives on a ranch outside Whitlash.

The postmaster said, "I think you'll find an interesting story if you visit with Mariah and her family." I contacted Eileen Eide, Mariah's mother, and spent an afternoon with the two of them at the ranch. Here's some of what I learned about this extraordinary local novelist.

"Give Mariah her own voice"

Mariah Eide is 22 years old and lives with her parents, Eileen and Matt, and brother, Zane, on a ranch near East Butte in the Hills. Mariah graduated from high school in Chester (CJI) in 2015 after completing kindergarten through eighth grade in Whitlash. Per a high school counselor and teacher Mariah was in the Honor Society, volunteered on several community projects and was the "go-to girl" at her high school to learn what was going on at school. At home she "loves being outdoors" and helps with chores around the ranch that include taking care of the lawn in the summer and having her own cows and garden.

Fall of 2016 Mariah completed "The Wild West," her first published novel. Mariah published a second novel this fall, "Hidden Memories." Mariah said the second novel began as a mystery but turned in to a "love story about my Great Grandma." That grandma, one of Mariah's most ardent supporters, eventually succumbed to dementia. Per Mariah, the main character in "Hidden Memories" feels what Mariah and her family went through dealing with the grandmother's demise. The young author has started an autobiography requested by her friends and family. The new book will be titled "All About M.E. (Mariah Eide)."

A significant other part of Mariah's story is that she was born with cerebral palsy (CP), a neurological disorder affecting all four of her limbs and speech. During our visit Mariah's mom said, "I always wanted Mariah to have her own voice, even though she couldn't talk. It was our goal to get her thoughts out the easiest way possible."

Eileen went on to explain that over the years Mariah used all sorts of communication devices from low-tech to high-tech, noting, "Mariah tried them all willingly." During my visit, using a computer-based program that allows her to "type" with her eyes, Mariah wrote a note to me stating, "...cerebral palsy is not really a disease, it's a disability. I've learned through practice to do many things I thought I couldn't do." She does not allow the difficulties associated with CP to define her.

Mariah's teachers and others credit her mom, Eileen, with assuring Mariah learned and did gain her own voice. Mariah wrote, "My mom was my best teacher. She sometimes pushed me more than I liked, but she made me learn." Eileen accompanied Mariah to classes from kindergarten through eighth grade in Whitlash. Then made the daily 40-mile bus ride to Chester with Mariah and attended high school with her daughter for four years. Eileen laughingly said, "I went to school for 29 years."

A counselor at CJI High School described Eileen's role at school with Mariah as "...her advocate, her cheerleader, her coach, her nemesis at times, as well as her most ardent supporter." In 2016 Mariah was honored with the "Yes I Can!" award, a recognition by her high school teachers and counselors of her "determination to learn and reach the goal of graduating."

Mariah started her first novel while in high school but put it aside because of the demands of school. After she graduated her dad suggested she work on the book. She noted her great grandmother's faith "...kept me going through it all." Mariah would take each completed page of the novel to family gatherings for feedback. For her dad she wanted to "write a western novel that was non-violent" just to prove it was doable. Her great aunt and uncle, Loxie and Dale Mailand of Harlem, read each manuscript and Dale edited both of Mariah's completed novels.

to write her novels

Dasher is a computer software that allows Mariah to use an "eye mouse" rather than a keyboard to select each letter while composing. Mariah moves her eyes to select each letter from a series arranged in order of how frequently letters are used (readers can go to YouTube and search "how to type with Dasher" for a demonstration of the software).

Even with the technological boost, it's a tedious process. Mariah writes from 15 minutes to an hour, three days a week, usually in the morning when her energy levels are the highest. She said the length of each session varies because "other things come up and writing takes a great deal of energy from me." A typical output during a writing session is five sentences. Her mother then saves the work into a word processing document for later editing and printing.

"The Wild West" has illustrations drawn by Eileen. Eileen explained, "To more quickly fill a page we added Clip-Art (digital art) to fill the space. After the text was completed, we removed the Clip-Art and I did the small drawings used in "The Wild West."" Mariah's second novel has photographs that Eileen took.

Asked about the challenges of writing a book, Mariah said, "Finding energy is always my biggest challenge." And what was the biggest reward of completing the book? Mariah wrote, "...seeing my first book bound and published. I got twenty five advance copies (before the full shipment arrived) to give to my family on Christmas Eve. I'll never forget the look of pride on my Great Grandma's face 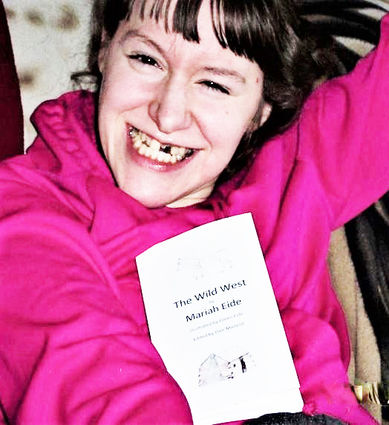 Mariah Eide of rural Whitlash poses with a copy of "The Wild West," her first published novel. The novel is a "western" with a modern setting. Mariah, who was born with cerebral palsy that affects her speech and limb movements, uses an "eye mouse" program to type what she writes. She graduated from CJI High School in 2015.

Interested readers can find Mariah's current books for sale online at http://www.etsy.com/shop/WhyKnotShoppe. Both books are available in Chester at Vintage Floral and the Supermarket. "The Wild West" is available in Cut Bank at Norman's Western Wear and BTI. The Prairie Peddler in Shelby has "Hidden Memories." Copies can be checked out at school libraries in Chester, Shelby, Valier and Great Falls and the Chester Public Library. Order both books direct from Mariah by calling 432-5545.