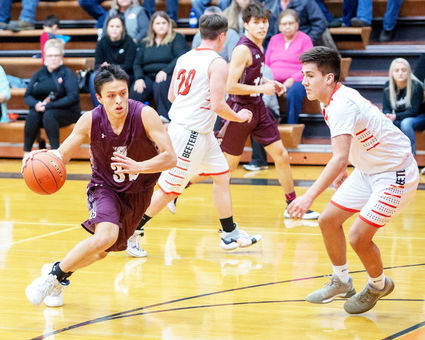 Harlem senior Brad Cichosz put the Wildcats on his back down the stretch scoring 11 of his game high 19 points in the fourth quarter of their thrilling 47-45 win over Chinook last Thursday.

The 'Game of the week' in Blaine took place in Chinook last Thursday with the 6-0 Sugarbeeters hosting the 5-1 Wildcats in a non-conference class between former Class B rivals.

Of course the Sugarbeeters are in the Class C now and currently hold the top spot in the District 9C. The Wildcats are undefeated in District 2B play with their only setback coming to the Rocky Boy Stars of the District 1B.

Many were expecting a shootout between the two fast paced teams but what took place was a defensive showdown that saw 14 lead changes and six ties in a contest that came down to the final seconds....