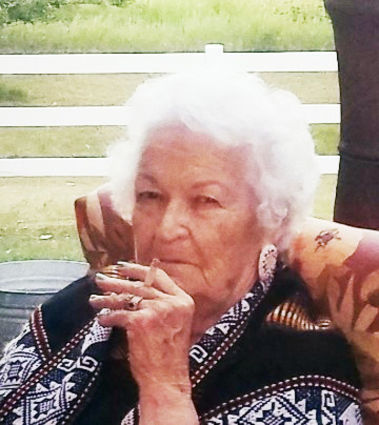 On January 13th our beloved mother, grandmother, wife, sister, auntie and friend was called home after a courageous battle with cancer. Her wake was held 7:00 p.m., Thursday, January 16, 2020 followed by her funeral at 12:00 p.m., Friday, January 17, 2020, both services were at the Fort Belknap Community Center. Holland & Bonine Funeral Home has been entrusted with arrangements. Please visit Jessie's online memorial page at http://www.hollandbonine.com to leave a message of condolence for her family.

Jessie James-Hawley, Turtle Woman, was born May 29, 1938 to Cecelia Ereaux and Aaron (Jay) James; and adopted parents, Jim Morris and Tiny Adams. Like the turtle, she was wise, strong, and won the race in life by setting her own pace and through steady strides she made her own trail in life.

She loved many and was loved by many. Her spirit was one of resilience, passion, and once she took on a cause she followed through with boundless tenacity.

Jessie was a part of a large family; she loved her parents and brothers and sisters fiercely. Jessie was a proud member of the Gros Ventre tribe whom she felt committed to by having the Gros Ventre voice heard through her writing skills and talent. Education was a passion and purpose in her life. When she decided to further her education, she got her GED and attended college at the University of Montana where she excelled in sociology and journalism. She worked in Great Falls for the Montana United Scholarship program, TRIO program; her duties included assisting minorities, inmates, women, and non-traditional students achieve their educational goals. She and many of that generation were filled with determination to assist and raise the level of awareness that education was not only a necessity to build a strong future for oneself but for the world around them. She bought a home in Great Falls for her three daughters, Rebecca Bishop, Dawn Bishop-Moore, and Erin Kay Bishop. During this transition from student to employee her three daughters lived with their dad Donald F. Bishop in Ashland, MT attending St. Labre Indian School. During this time, she told the story that she called her mom, Cecelia Lankford and was feeling sorry for herself, "The girls want to live with their dad and not me." Cecelia, a wise woman said, "Enjoy the vacation. They will be back!" She was right. They returned to their mother with a deep appreciation for her nurturing and welcoming arms. Dawn presented

Jessie with her first grandchild during this time, Heather Dawn Small, bringing forth a new facet to Jessie's life, that of the role of grandmother.

Jessie returned to her homeland as the Tribal Health Director, where she fought to bring better health care to the people she dearly loved. She was asked to bring her strong convictions and talents for serving the people and was elected to the Tribal Council. While serving on the council, her youngest daughter was diagnosed with Leukemia, making her commitment to health care one of personal need. Her daughter Rebecca joined the US Army during this time, adding to Jessie's many roles as a proud parent of a soldier.

During this time, she met and married the honorable Cranston Hawley, a rancher and the Tribal Judge. Through this union she conceived their daughter Nykee Sarah Jai Hawley. Jessie told the story, "I thought I was going through early menopause brought on by the stress of Erin's health crisis. Turns out I was pregnant at 45 years of age! When Erin found out she said," You two need to get married now! So while in Seattle with Erin going through cancer treatments, they married with Erin serving as a witness. Erin was taken from them in July and within a month Nykee was born. To lose one child at 16 and to welcome a child into the world a month later showed many Jessie's inner strength and divine faith that helped her juggle two of life's toughest times; labor and losing a child.

Because of these events Jessie made the decision to step down from public service and dedicate her life to other endeavors. She became an Avon representative, excelling in sales to the people in her community, receiving many ALBY awards for top sales. During this phase in her life, she used her time to assist many people who always had a need for her wisdom, words and actions to go to battle for them in many arenas. Jessie accepted the position as Editor for the Fort Belknap newspaper. Writing many articles depicting the lives and events, keeping all informed on important issues for the people of the Fort Belknap and surrounding communities.

She took great pride in providing this service to so many. Jessie used her writing talents for families during their time of loss, writing eulogies for people. She would interview family members and turn eulogies into amazing stories of one's life. She believed that each and every person had an amazing story to tell.

Her daughter Rebecca came to her with an idea for a business, selling gift baskets. Jessie took that suggestion and created, 'Gift Baskets by Turtle Woman', once again providing a much-needed product and service for community members. Jessie was a strong member on the Governor's Council of Aging for several years. Being married to the Tribal Judge, she wrote many wedding vows and speeches for her husband Cranston. She was always there for her children, including Cranston's children, Sharon, Linda, Tammy, Cathy and Jim. Branding was a time for her to excel - frying up chicken, homemade rolls and her famous Cinnamon Knots! Many attended the branding's just for the food!

In 2014 Jessie was diagnosed with breast cancer. She was stunned but she fought this disease with her usual tenacity and conviction that she was going to beat this enemy from within. She did, although she suffered many of the side effects of the chemo and radiation. She rarely complained, not giving the disease the satisfaction of seeing her weak, or down hearted. Her family jumped in and fought the fight alongside her, taking on many of the duties that everyday life demands.

Just when life began anew and a sense of "everything is going to be okay," Jessie was dealt a dirty hand by fate. The day before branding in 2016, Nykee was struck down and taken from her. Jessie and family were shocked and broken hearted by this tragic event. But once again she summoned her faith, courage, and conviction, and accepted this loss with grace and dignity. Displaying that life can knock the wind out of one but you take another breath and move forward.

Jessie loved all her children and was assisted by her "girls" during this crisis. Her love for Nykee and her children Phoenix and Griffen was strong. Jessie will miss seeing all of her grandchildren and great grandchildren grow and accomplish so much. But in heaven she will be their strongest ally, cheerleader and spiritual strength to move onward and upward.

During Jessie's time in remission, she lived life one day at time, grateful for each and every day, attending community events, taking care of her aging husband through his journey, and enjoying time well spent at the casino, gatherings and at home.

Sadly, she began to feel something was wrong last summer, and in December after many medical tests and exams she was diagnosed with bone and lung cancer. The cancer came back with a vengeance, and although some might think that Jessie lost the battle, she is now in Heaven with the strongest of warrior angels and will provide strength, and support from Heaven above for all. Her Catholic faith gave her great comfort throughout her life. She would see a need and work to create a solution. She was proud of her faith and happy to provide serving her God through good works. When she was diagnosed, she told her 'girls' no whining or crying! That is her legacy she didn't whine and cried in private, have faith you can get through anything that life throws at you.