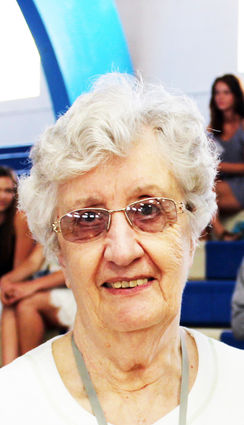 Lois Emily (Dennison) Johnson 87, passed away on Friday, January 10th, 2020 at the CMMC Nursing/Rehab Center in Lewistown, MT with her family by her side.

Lois was born October 10th ,1932 to Harland and Susan(Graetz) Dennison in Concrete, ND. She was later joined by three brothers Charles, Tom, Dick and sister Sheila. In Lois' younger days she lived with her parents and siblings in several locations in North Dakota. She graduated as valedictorian from Walhalla High School in 1949 at the age of 17, and had she had the opportunity to further her education she always said she would have studied architecture.

In 1952, she moved with her family to Lewistown, MT and worked at the 1st National Bank and later at Ryan's Central Feed Co.

Lois married Elvin Johnson March 21st, 1963 and shortly thereafter joined the American Lutheran Church. They farmed and ranched in Hogeland and were blessed with a daughter Cheryl Lynn. Lois was a stay at home mom till her daughter started school and then she worked at the nursing home in Harlem.

The family moved to Hamilton in 1979 after Ellie sold the farm to his brother and retired. While in Hamilton Lois worked as a bookkeeper at Humphreys Greenhouse. She and Ellie moved to Billings in 1998 to be closer to family.

They owned a home prior to moving to Aspen View Retirement Community. She moved to Denver for a year to be closer to her sister, when Ellie required nursing care and she needed more assistance due to failing eyesight.

In 2009 she moved to Lemmon, SD where she took pleasure in an apartment which included her own flower beds and being closer to her grandchildren.

Throughout her life, she was an active member of the American Church, the American Legion Auxiliary and several homemaker groups. Over the years, she enjoyed having a large garden and cooking for family members, crocheting socks and making quilts for her children and grandchildren. She was an avid reader, loved board games, puzzles and cards.

In May of 2019 she returned to Lewistown to live at Shepherds Way Assisted Living Facility. While in Lewistown she enjoyed her outings with her sister and brother-in-law, reacquainting herself with the area.

After suffering a fall in early October, she was transferred to CMMC Nursing/Rehab Center.

At her request cremation has taken place. A memorial service will be held this summer in Lewistown, MT. Memorials can be given to the charity of your choice.

The family would like to thank the staff at Shepherds Way and CMMC Hospital/Nursing/Rehab Center for the excellent care that they provided.