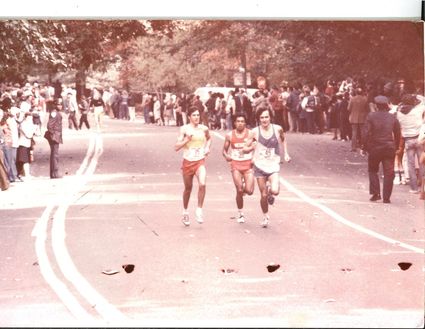 Tom Raunig racing through New York City's Central Park on his way to a sixth-place finish in the prestigious New York City Marathon.

A number of Havre High School graduates have become professional athletes over the years, but none has possessed greater longevity nor more national and international prominence than the running Raunigs, the first brother and sister duo to qualify for the US Olympic marathon trials in the same year.

Debbie Raunig, HHS Class of 1973, and Tom, Class of '77, both long-standing world class marathoners, will be featured speakers at the carbo-load dinner the evening before the Bear Paw Marathon premier on Saturday, June 6. The pasta banquet will be held in the MSU Northern Student Union Ballroom for runners, families, friends and non-runners.

The Raunigs have agreed to participate in as many facets of the weekend event as they can, including presenting awards to the winners. Debbie has said she would like to enter a shorter run, such as a 5K or mile.

The marathon, the brainchild of Rachel Hutchison, chief of staff for Montana State University Northern Chancellor Greg Kegel, will begin on Sucker Creek Road and finish on the MSU Northern campus.

Debbie Raunig won two state Class A championships after transferring to HHS from Fort Benton her junior year, the year Title IX was going into effect. She took the title in the mile run her junior year and then topped the state field in cross country at the outset of her senior year. She also crossed the finish line first in the mile her senior year, but was disqualified because a runner adjacent to her had tripped and gone down.

As a Fort Benton High sophomore, Raunig took third in the mile at the Class B state meet.

With her best time and then HHS school record of 5:29.0 in the mile, Raunig remains the fourth on the list of fastest girl milers in school history. Remarkably, her average mile splits during her fastest 26.2-mile race were in the 5:42 range, about 13 seconds slower than her fastest 1-mile time in high school.

Debbie completed her freshman year at Northern Montana College, now MSUN, then took a job with the telephone company, her running days apparently at an end.

Younger brother, Tom, Class of 1977, set HHS school records in the mile and two mile runs and finished third in the AA mile and two-mile runs and at the state AA cross country meet. His two-mile time of 9:32.80 still tops the track honor roll on the west foyer's south wall and his mile time ranks him fourth.

Tom was recruited to run at the University of Montana and completed a stellar career, earning all-American honors and setting a 10,000 meter school record that still stands. His freshman year as a Grizzly, he was named to the US National Junior Track and Field team and competed in Russia and Germany.

When Tom went to Missoula, Debbie chose to end her telephone position and take up residence there, too. It took a while, but Debbie eventually started running in area road races, frequently taking home the trophy.

Also in 1982, Tom placed sixth in America's mega event, the New York City Marathon. The next year, he was the first American to cross the finish line in America's Marathon in Chicago in a personal best 2:12:55. His mile splits for the 26.2 mile race averaged out at 5:07 per mile.

He qualified for the 1984 US Olympic marathon trials as one of the favorites.

Raunig signed on with the Nike Shoes of Eugene, Ore., in 1981, and ran professionally with Athletics West full time until 1985, when he sustained a stress fracture. He decided to take a year off and returned to school to pursue a masters degree. He never returned to full-time running as he went on to earn his doctorate and began a long and illustrious career as a track and field coach.

He moved swiftly from the high school ranks to become head cross country coach and distance coach for the track team at Montana State University, though he continued to run in a semi-professional fashion into the late '90s. His 1993 cross country team won the Big Sky title and he was named conference coach of the year. Raunig and that team were inducted into the MSU Athletic Hall of Fame.

After eight years at MSU, Raunig took over as head coach of the University of Montana track-and-field and cross country programs, which he guided for 12 years. He retired from coaching in 2008 and accepted the job of overseeing the physical education program at Providence University in Great Falls.

During his career at Montana's two largest universities, Raunig coached numerous all-Americans and several NCAA national champions, including Shannon Butler, who won both the 5,000 and 10,000 meter titles during his MSU career. Many of his athletes went on to professional careers, as well.

While Tom took the traditional route to distance running success, Debbie approached running as an avocation, choosing not to compete at the college level. After winning her share of shorter races, Debbie opted to enter the Governor's Cup Marathon in Helena in 1982. She blitzed the field and established an age group record of 2 hours and 54 minutes that still stands.

Debbie continued running in road races while serving her dietetic internship in Detroit.

She subsequently burst onto the national scene in October 1983 with her record-setting win in the Portland, Ore., Marathon. That win also qualified her for the U.S. Olympic trials. Her Portland record of 2:43:51 stood for several years and is still among the fastest times ever recorded there.

With the 1984 Olympics came the first opportunity for women to compete in the international spectacle. All eyes were on the trials marathon for women and the women did not disappoint.

Tom and Debbie made US racing history when they each qualified for the '84 Olympic trials, his race held in Buffalo, New York, and hers in Olympia, Washington. That feat was duplicated for just the second time for the 2016 trials, but neither of those siblings rose to the calibre of the Raunigs. A third brother and sister pair recently qualified for the 2020 trials, too.

Each of the '84 races was loaded with what at the time were household names.

Debbie's field was headed by winner Joan Benoit, the eventual winner of the 1984 Olympic marathon in Los Angeles. Finishing second in the trials was Julie Brown of Billings. Other notables included Julie Isphording, Margaret Groos, Nancy Ditz and Cathy O'Brien.

Also competing from Montana in the historic '84 trials were Ann Danzer of Helena and Shirley Weaver of Great Falls. Weaver had previously called Havre home, too, when she taught PE at Havre High in the mid 1960s.

Debbie finished ahead of 166 other runners who completed the Olympic trials marathon, placing 30th, less than 9 minutes behind Benoit.

Both Raunigs qualified for the US Olympic 10,000 meter trials, as well. Tom opted to focus on the marathon trials while Debbie decided to go for both.

She returned for the 1988 trials in Pittsburgh, Penn., as one of the favorites after producing the fastest marathon time by an American woman in 1986. She finished sixth, just 2 minutes and change out of first place. Due to heat and humidity that year, only 154 of the 204 runners who started the race finished.

Debbie's professional running career spanned nearly two decades, from 1983-'99, during which time she continued her education and started her career and family.

In total, Debbie qualified for and competed in four consecutive Olympic marathon trials, culminating with the 1996 trials.

As a member of the US National Team she ran in various meets around the world, including Hiroshima, Japan. She continued making trips to foreign shores to compete until the end of her career.

Debbie and Tom are by no means the only outstanding runners in the family. 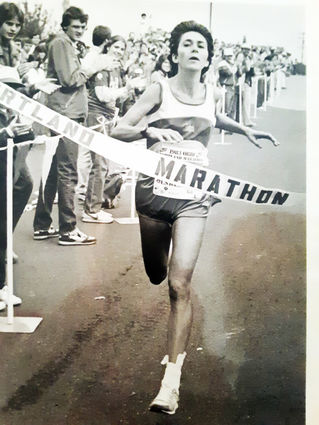 Middle brother Mike, who graduated from HHS in 1975, competed in track, swimming and cross country in high school and was one of the leading proponents of the road racing boom in Havre at the time his siblings were setting high standards nationally and internationally. He married his high school sweetheart, DeMaris Dolph, and worked as a lineman with Montana Power/NorthWestern Energy. He eventually transferred to Missoula, where they continue to make their home and stay active.

The Raunig family's roots run deep in northcentral Montana. Their parents Dale and Mary Ann both grew up in the Stockett-Centerville area. The family had lived in Fort Benton for 11 years before Dale was transferred in his position with Ma Bell to Havre, where Mary Ann went to work at Northern Montana Hospital.

After Tom's graduation, the family moved to Great Falls, where the youngest son, Dennis, won Class AA distance titles for the CM Russell Rustlers. He is a Northern graduate.

The Raunigs are still full-time Montanans, Debbie splitting her time between the Big Arm area along Flathead Lake and Missoula, and Tom living and working in Great Falls.