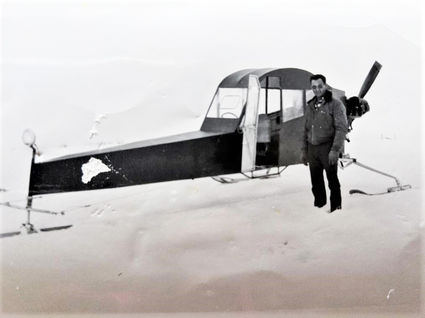 This photo shows Ed Mlinar beside a snow plane believed he built in the 1950's. A private pilot, Mlinar used his interest and knowledge of flying to build the snow plane. Mlinar's daughter, Lori Ramburg, said the machine is still stored in a building on the family farm north of Joplin. Mlinar, a friend of the local rural mail carrier, would deliver mail when the snow was too deep for a conventional vehicle to drive the route

Columnist's note: Alert readers may recall my request for information about snow planes in our area in a June, 2017 article in the "Journal." I got a few rumors from that appeal but if snow planes were ever used in Blaine County, they were scarce at best.

Snow planes, also called 'snow cars' or 'air-sleds,' don't fly. They are lightweight enclosed conveyances for one to four passengers powered by a rear mounted engine that drives a propeller. Most snow plane bodies sit atop a front ski and two rear skis. The spinning propeller pushes the machine across the snow. A few companies manufacture...