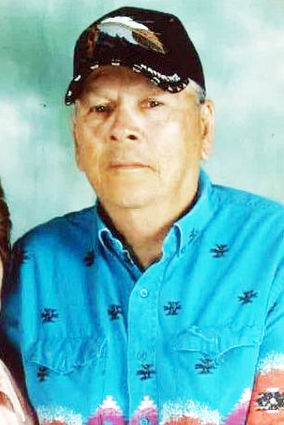 Gerald B. Main, Sr., 87, passed away due to natural causes on Sunday, January 26, 2020, at Billings Clinic. Wake services began at 6:00 p.m. on Wednesday, January 29, 2020, and continued until his traditional funeral service, which was held at 11:00 a.m. on Thursday, January 30, 2020, all at the Chief Nosey Center in Lodge Pole. Burial followed in the Lodge Pole Cemetery. Holland & Bonine Funeral Home has been entrusted with arrangements. Please visit Gerald's online memorial page and leave a message of condolence for his family at http://www.hollandbonine.com.

Gerald was born on April 15, 1932, in Hays, Montana, to Tom and Mae (Filesteel) Main, one of a set of twins who lost his brother, Harold, in infancy. He was raised along the creek in Hays, behind what is now Martin's Store. He, his parents, and his many siblings lived alongside many of the Gros-Ventre ancestors, who were all full-blood, such as Lone Fly (Gerald's grandpa who spoke only Gros-Ventre and sign language) and his wife, and further down the creek, Rufus Warrior and John Turcotte, to name a few. He grew up during a time when things were simple, but times were tough, as he always said. Tom Main, his father, was a very stern, but kind, individual who was also highly intellectual and self-educated. He only completed school up to about the 6th or 7th grade, but had the educational intellect of a college professor, all of which Gerald inherited. Gerald attended St. Paul Mission School in Hays all through elementary school, and completed high school there, graduating at the top of his class in 1950.

On December 11, 1950, Gerald enlisted in the United States Air Force and attended basic training at Lackland Air Base in San Antonio, Texas. From there, he was sent to Clerk Typist School at F.E. Warren Air Force Base in Cheyenne, Wyoming. Upon graduation, he was sent to the Air Force Missile Test Center at Cape Canaveral, Florida. He was then sent overseas to Tachikewa, Japan, and from there to the 75th Fighter Interceptor Squadron in Seoul, Korea. Upon conclusion of the Korean War, Gerald was sent home to Lowry Air Force Base in Denver, Colorado, where he received his honorable discharge on December 19, 1954. While serving in the Air Force, he earned several medals, including the United Nations Service Medal (while in Korea), Korean Service Medal, Far East Command Service Medal, and Good Conduct Medal from the Air Force. In addition, he also received a "Commendation Medal" from the South Korean government.

After returning home and marrying the love of his life, Christine Cliff, Gerald first worked as a clerk/typist for the BIA at Fort Belknap Agency. He then left there and began his 32-year career as a bus driver. He first drove for the Lodge Pole Elementary School in 1962 when Lodge Pole was its own school district. When Lodge Pole and Hays combined school districts, he continued to drive for the newly established School District #50. As a bus driver in those days, the winters were very harsh, especially out in the mountain areas, with no four-wheel drive buses. Gerald, however, loved his students, and enjoyed working with the other bus drivers, Joe Kirkaldie, Paul Webb, Sr., Tony Castillo, Darryl Crasco, Russell Plainfeather, Phillip Bell, Dale Fortin, Kenny Wing, Jr., Bunky McMeel, Winnie Morin, William LongKnife, and Perry Main, just to name a few.

Gerald drove bus for the school district for 26 years, retiring in 1988. He realized he was not quite finished working, and not exactly being the type to just sit around, he came out of retirement and began working as a bus driver for the Fort Belknap Head Start Program. He began there in 1994, first for Hays at the Ramona King Center, then transferred to Lodge Pole later where he remained. Gerald's main reason for driving bus was that he loved kids, especially the tiny preschoolers at Head Start! It is a well-known fact that he had hauled children of the 1960's, their children, and now their children's children! In a total of 47 years of driving, Gerald has not had a single traffic accident.

In addition to their seven children, Gerald and Christine were also parents to numerous grandchildren, great-grandchildren, nieces, nephews, and others who needed a place to go. They took a small dance troupe around to local pow-wows showcasing the talents of not only their children, but any children that wanted to participate. They were also part of the old house dances that were held around Lodge Pole and frequently visited Andrew and Jenny Gray, Walter & Agnes LongFox and many of the old timers. From them, Gerald and Christine continued to teach their children the ways of dance and song.

Gerald was an enrolled member of the Gros-Ventre (Aaniii-Nin) Nation, Upper Quarter Clan at Fort Belknap, and was given the Gros-Ventre name "Ba-Na-Sa-Wan" meaning big body. His paternal grandparents were the late Robert Main, Harry Face Woman, Chief and Mrs. Lamebull, Lonefly, and The Boy; and his paternal grandparents were Filesteel. As many do not know, Gerald came from a long and very prominent Gros-Ventre family. The last keeper of the sacred Gros-Ventre Flat Pipe was his great-grandfather The Boy. His father, the late Tom Main, was to be the next Keeper of the Flat Pipe, however he passed away before ole The Boy could give it to him. Thereafter, The Boy passed on, leaving the Pipe without a Keeper.