Harlem and Chinook peaking prior to District Tournaments 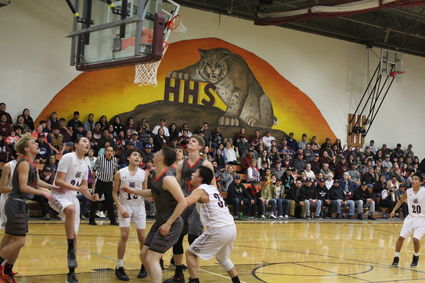 Senior Truth Brockie finds his way to the hole for two against the Chinook Sugarbeeters Friday night in Harlem. The Harlem Wildcats earned a hard fought victory over the 'Beeters winning 86-71.

The Harlem Wildcats and Chinook Sugarbeeters took the opportunity last weekend to hone their skills and purge any regular season-ending jitters ahead of their impending Class B and C district tournaments, respectively

On Thursday in Glasgow, the 11-2 'Cats chewed up the Scotties 86-55 behind a stingy defense and the double-digit scoring of four players. Tyler Cichosz led the way with 34, including four treys and 2-for-2 from the free throw line. Senior Brad Cichosz notched 20 points, followed by R.J. Ramone with 14 and Daniel Lawrence with 10.

Conference games aside, the big matchup of the weekend was the Friday tilt between Blaine County's Wildcats and Chinook Sugarbeeters in Harlem High's "Jungle" gym. The exciting contest was a tale of two halves, with the 'Beeters dominating in the first half and the 'Cats turning the tables in the second.

The Chinook boys, 12-3 overall and 10-1 in district play, were up 23-15 at the end of the first quarter. With the help of seven made free throws in each of the first two quarters, the 'Beeters took a 40-33 lead into half time.

The key to Chinook's first half success was the team's ability to shut down Harlem's attempts to drive the lane, successfully driving the lane on their end and dominating the offensive boards. In the process of attempting second and third baseline shots inside the paint, the taller 'Beeters drew numerous fouls resulting in trips to the charity stripe.

Though the foul count was nearly even with Harlem picking up 19 and Chinook 16 for the game, the 'Beeters committed most of their fouls in the open court while Harlem was committing shooting fouls underneath. As a result, Chinook was 14 of 22 at the line in the first half and Harlem was 5 of 8.

Junior standout Ethan Bell picked up 14 of his 26 'Beeter points in the first half. Sharing the early scoring load were Hunter Neibauer with 8 and Toby Niederegger and Oskar Pula with 7 each.

The Wildcats seldom got more than one look at the basket during each of their first-half possessions, often having their shots blocked by the 'Beeters' 6'7" junior center Reese Elliot. Elliot had a stellar night defensively and was a respectable 6-9 from the free throw line for the game to go along with two second half field goals.

The Wildcats changed tactics after the half-time break, turning to an over-the-top attack, lofting passes over the pursuing 'Beeters' heads on the offensive end of the court. In the process, the 'Cats found open shooters who either penetrated the key or promptly buried a three-pointer from the wing.

On the defensive end, Harlem opened up with an aggressive zone defense that succeeded in shutting down the passing lanes and resulting in several steals and offensive blunders by the 'Beeters. The 'Cats used inside and outside shooting to pick up 21 points to the 'Beeters six third quarter points to take a 54-46 lead entering the fourth and final stanza.

Bell led Chinook's 25-point fourth-quarter output, the team's best of the night, with 10 points of his own. But it wasn't enough, as Harlem sizzled the nets with eight 3-pointers down the final stretch on its way to 32 of its 86 points on the night.

Two Wildcats fouled out in the fourth quarter. The first to go was Trent Main, the 6'4" junior who had the had the unenviable task of guarding Elliot. A few plays later, Tyler Cichosz joined him on the bench.

The final score left Harlem at 11-2 over all on the season and Chinook at 12-3 overall. Chinook's other two losses were a 47-45 heart-stopper to Harlem in Chinook and a loss to District 9C foe Fort Benton. The 'Beeters have a convincing victory over Class B Malta, as well.

Also on Friday, the Hays/Lodge Pole Thunderbirds hosted the Turner Tornadoes boys in one of two turbulent and tightly contested 9C games on the night.

Turner blew through the first quarter, taking a commanding 18-7 lead only to see the T-Birds take flight in the second quarter to cut the half time lead to just 5 points, 35-30.

Hays/Lodge Pole opened the second half with a 19-point surge to tie the score going into the final stanza. The T-Birds used a balanced attack, with eight players scoring 5 or more points on the night, led by three players in double figures. Wyman Bringing Good led the way with 15 points followed by Deshon Shambo with 12 and Daniel Henry with 10.

Six Tornadoes also got on the board, and kept the score close until the closing moments of play behind an outstanding game by Shane Kimmel with 31 points and Austin Welsh with 24.

On Saturday, the 'Beeters of Chinook rebounded from their Friday meltdown by cooling the hot-handed Tornadoes in a pivotal 9C match up heading into the final weekend of conference action.

Chinook broke out quickly, jumping to an early lead they stretched to 23 points at the close of the first quarter, 31-8. The score was 35-12 early in the second quarter, when Welsh buried a 3 to cut the lead to 20. Chinook subsequently added 2 of its own before the 'Beeters heater, Bell, responded with a 3 of his own to extend the lead to 25. 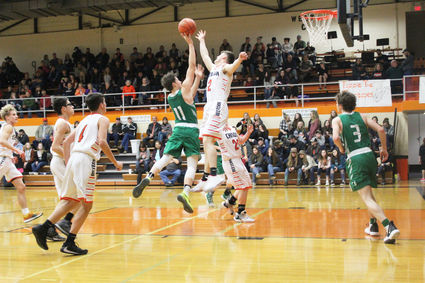 Hunter Neibauer goes up for a block against Turner. The 'Beeters bounced back from Friday nights game cruising to an 83-49 win over the Tornadoes.

The 'Beeters began to pull away in earnest midway through the third quarter, extending the lead to 39 points before the Tornadoes' Welsh found nothing but net on a 30-foot jumper to close out the quarter 68-32.

The fourth quarter was more of the same, with Welsh and Kimmel leading the way for Turner and Chinook's veterans and youngsters kept the margin at the 35 point range. Welsh concluding the scoring as he did to end the third with a 3-point floater. The final margin was 34, with 'Beeters on top 83-49.

Hays/Lodge Pole's trip to face Chester-Joplin-Inverness on Saturday resulted in another Thunderbird win, 67-57.