17-1 Lady Cats will take No. 1 Seed into the District 2B Tournament in Malta 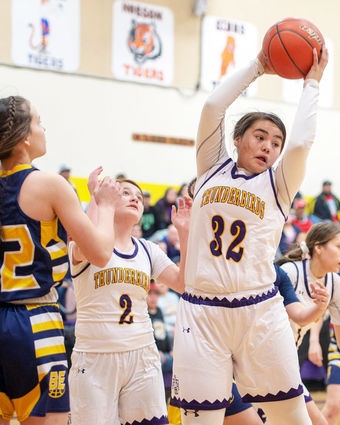 Hays/Lodge Pole senior Mulleeah Stiffarm has been a vital part of the Thunderbirds stellar 2019-20 campaign. This weekend she will look to help her team secure a top three finish at the District 9C Tournament and advance to the Northern C Divisional next week in Great Falls.

The regular season high school Class B and Class C basketball seasons concluded this past weekend and now Blaine County teams have their sights set on District Tournaments. The District 2B Tournament will get underway this Thursday in Malta and will feature the No. 1 Seed Harlem Lady Cats. The District 9C Tournament will begin play Thursday in Havre at the Havre High School Gymnasium. The Turner Tornadoes enter as the No. 3 Seed, the Hays/Lodge Pole Thunderbirds are the No. 4 Seed and the Chinook Sugarbeeters are the No. 7 Seed.

The Lady Cats will carry a ton of momentum into the post season after a pair of dominate performances to close out the regular season. In Box Elder Friday night senior Kailee Henry caught fire from distance to power the Lady Cat offensive attack. Henry knocked down three triples in the opening quarter. She added three more in the third quarter and drained her seventh of the contest in the fourth to finish the contest with 31 points.

Senior L'Tia Lawrence turned in another solid effort scoring 17 in the win while super sophomore Taya Trottier added 14 to help the Lady Cats secure a 85-53 non-conference win over the Box Elder Bears.

Saturday afternoon in front of their hometown fans for the regular season finale the Lady Cats honored their seniors after turning in another stellar effort on the court.

Henry continued her assault on the nets knocking down a pair from distance in the opening stanza. Henry added four more triples in the third and for the second consecutive night, the senior buried her seventh three-point bomb in the final eight minutes of action to finish th game with 29 points.

Lawrence contribute 16 second half points and scored 18 in the Lady Cats 73-33 District 2B win over the Poplar Indians.

The Harlem Lady Cats will take the No. 1 seed into the District 2B tournament in Malta this week and will begin play Friday at 6:00 p.m. against the winner of the Wolf Point/Poplar play-in game Thursday. By virtue of their top seed entering the tournament the Lady Cats have already secured a spot in the Northern B Divisional in Shelby, March 5-7.

The Turner Tornadoes honored their lone senior Sarah Billmayer Friday night in the Tornadoes final performance in front of the hometown fans this season. Turner hosted the Big Sandy Pioneers and controlled the contest start to finish.

Turner led 19-9 entering the second quarter 33-18 at intermission and cruised to a 60-25 win over the visitors. Billmayer led the offensive effort for the Tornadoes with a pair of three-point buckets and 19 points in the win. Sophomore Emma Billmayer added a pair from distance as well and scored 14, while junior Brooke Reed added 9 more in the win.

Saturday the girls suffered a tough 60-48 loss to the North Star Knights locking up the Tornadoes No. 3 seed at this weeks tournament.

Friday the Thunderbirds fell to top ranked Roy/Winifred on the road 77-40 but bounced back Saturday in Box Elder with a well deserved 70-63 win over the Bears.

Senior Mulleeah Stiffarm has been an outstanding leader of the Thunderbird squad for four years and was money down the stretch. Stiffarm converted on nine of ten attempts from the charity stripe and converted 13-15 for the contest, scoring 24 points to help secure the win. Junior Ella Messerly came up big as well, contributing 14 points on the night. 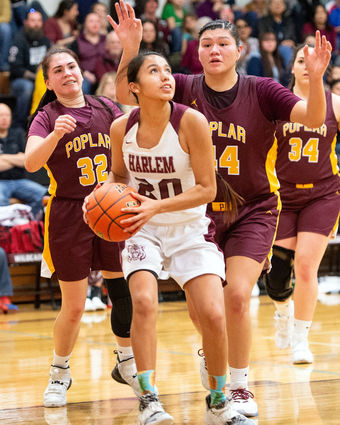 Harlem senior L'Tia Lawrence has put together another impressive season and together with her teammates is looking forward to another deep post season run.

The District 9C Girls Tournament will begin Thursday in Havre at the High School Gymnasium and will conclude Saturday evening. The top three teams in the tournament will advance to the Northern C Divisional in Great Falls next week.

The Turner Tornadoes finished the regular season with a 12-6 record, including 10-4 record in District 9C play and will enter the tournament as the No. 3 Seed. The Tornadoes will step on to the court Thursday afternoon at 4:00 p.m. when they square off with the No. 6 Seed Chester/Joplin-Inverness Hawks.

The Chinook Sugarbeeters concluded the regular season with a overall record of 1-17 including a 1-13 conference mark. The 'Beeters will be the No. 7 Seed in the tournament and will get things started Thursday evening at 5:30 p.m. against the No. 2 Seed North Star Knights.