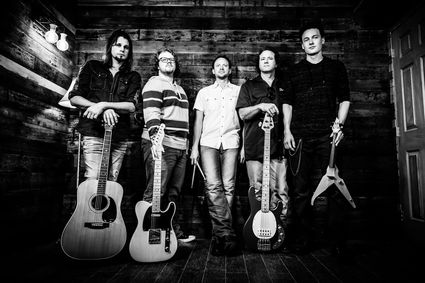 Although the Fair Foundation is putting on the event, which is in response to the community's suggestion for something more festive like a gala, they will have sponsors. The purpose of the event is to raise funds for the completion of the Indoor Event Center. "Getting that building up is our main goal right now," Ramberg said.

In addition to offering a prime rib dinner with cheesy potatoes, green beans, a roll, and dessert and featuring a no host bar provided by the Bear Paw Saloon, music is on the menu.

Event organizers have booked Marshall Catch, a band that describes itself as "modern alternative rock with a classic nod." Fair Foundation members heard the band and met their lead singer at the Rocky Mountain Association of Fairs (RMAF) Fair Convention last fall. "We liked what we heard, so we decided to book them for our gala," Ramberg stated.

According to their website, Marshall Catch "blends the poignant songwriting of Cat Stevens with the guitar-driven sounds of Collective Soul. The band boasts harmonies that lend a nod to early Eagles records and riff-rock anthems that channel the feel-good bands of LA's Sunset Strip in the 1980's."

Marshall Catch was formed in the Flathead Valley in Montana in 2010 by lead singer, song writer, and front man Luke Lautaret, who still performs lead vocals, guitar, and harmonica for the band. He is joined on stage by Max Armstrong on fiddle and mandolin; Matt Haun on bass and contributing harmony vocals; Jared Denney on drums, keyboard, and harmony vocals; and Zach Christ playing guitar and saxophone and adding harmony vocals. The band is known for their high-energy live concerts that showcase their stage presence and knack for storytelling.

"We started out in a basement in Evergreen, Montana, a sort of red-neck ghetto where residents would gladly make moonshine in their bathtubs if they didn't have a car engine taking up the space instead. In Evergreen, people made do with what they had. Nestled among trailer houses that had been stapled together to form trailer mansions, four musicians came together to create an insanely catchy, melodic, and powerful blend of rock and roll," Lautaret stated.

Those musicians have changed over the years, but Lautaret has remained a constant. Regardless of the eclectic inspirations and backgrounds of the band members of Marshall Catch, it has always been about the music for them. And the music speaks-with songs rooted in meaning and personal reflection.

For example, Lautaret wrote "Lay Your Head Down" after his grandmother was diagnosed with Alzheimer's and "Your Own Way" as an anthem to live by during difficult times. In that anthem, the refrain claims: "Don't let go; / you're gonna make it someday. / Don't say no; / you've got to do things your way."

Lautaret puts just the right amount of raw emotion and depth into each phrase but still remains sincere enough to make listeners feel like he is singing the song for them. The other band members feed off of Lautaret's energy, and together they capture emotions that ring true.

This truth was especially evident when Marshall Catch was invited to Pearl Harbor to play their original song "The Ballad of the USS Arizona" for the 70th Anniversary of the attacks that occurred there on December 7, 1941. Melodic and moving, Marshall Catch transcends barriers with their music: "I am a graveyard; your sons are safe here with me / I will stand watch over this harbor for all eternity / until the last one comes home."

"The music is why we are here; otherwise, we're fairly unremarkable gentlemen who just happen to be from a place few have heard of," Lautaret said.

According to reports from Ramberg, the band will be printing posters for the Blaine County Fair Foundation's gala and running a radio package to promote it.

Those interested in tickets should call Ramberg at 945-3841. Tickets are also available for purchase at Bear Paw Saloon, which is located at 213 Indiana Street in Chinook.