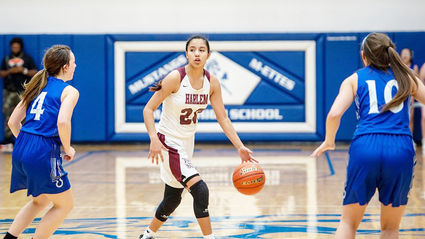 Senior L'Tia Lawrence brings the ball down the floor during Championship play against the Malta M-Ettes.

The first weekend of postseason action is in the books as the District 2B and District 9C Tournaments were played in Malta and Havre. Blaine County teams found plenty of success on the hardwood with three advancing to the Divisional Tournament. The Harlem Lady Cats edged Malta 48-46 to claim the District 2B Championship in Malta. The Turner Tornadoes took down the Chester/Joplin-Inverness Hawks in the opening round 45-39, and the North Star Knights 58-54 in the semifinal before falling in the Chipper to earn the District 9C No. 2 Seed at the Northern C this week in Great Falls. The Hays/Lodge Pole Thunderbirds return to the Northern C Divisional for the first time in 32 years (1988). They edged the Box Elder Bears 64-61 in the first round, then fell to eventual champion Fort Benton in the semi-final round. Saturday they blitzed the Chester/Joplin-Inverness Hawks 78-65 and the flew past the Box Elder Bears in the Consolation Final 65-49 to earn the District 9C N0. 3 Seed. The Chinook Sugarbeeters season came to an end after losses to the North Star Knights and the Chester/Joplin-Inverness Hawks.

In the semi-final the Lady Cats faced the Wolf Point Wolves, a team they had handled with ease twice during the regular season. Friday nights contest would be more of the same. The Lady Cats got off to a quick start doubling up the Wolves 20-10 in the opening quarter. Sophomore Taya Trottier kick started the offense with nine first quarter points, senior Kailey Henry added six and senior L'Tia Lawrence dropped one in from long range.

The Lady Cats maintained the attack in the second, putting 17 more on the board to extend their advantage by six to 37-21. Sophomore Gabi Bell came up big in the frame, scoring eight including a bomb from beyond the arc.

Following the halftime break Harlem was still focused on the task at hand and outscored the Wolves 21-12 in the third quarter to take a commanding 58-33 lead into the final quarter. Lawrence connected twice from down town and scored 11 in the frame to power the offense.

Harlem took their foot off the gas down the stretch, securing a 72-46 win to advance to the championship contest Saturday night. Lawrence led the attack with 24 points while Trottier added 18. Bell contributed 13 in the win while Henry added 10 for the Lady Cats.

Saturday it was indeed the Malta M-ettes taking the court with the Lady Cats. Harlem edged Malta by a single point in the teams first meeting in Harlem and the M-ettes took the second contest in Malta setting up a championship surely to entertain all in attendance..

In a low scoring opening eight minutes it was Malta that held a slim 9-8 advantage entering the second quarter. Henry provided the bulk of the scoring in the opening frame connecting twice from long range. The M-ettes would settle in offensively in the second, outscoring Harlem 15-9 to take a 24-17 lead into the halftime locker room.

Head Coach Marlin Lawrence made some halftime adjustments and his pep talk certainly had an impact as the offense came alive for 15 third quarter points helping the Lady Cats close the gap to 35-32 entering the fourth quarter. Henry knocked down her fourth and fifth trifectas in the frame to power the offense.

Down the stretch the Lady Cats were able to keep the momentum going and got three point buckets form Lawrence and Trottier as they outscored Malta 16-9 to earn a 48-46 hard fought win and District 2B Championship.

Harlem was led in the contest by Henry's 18 points and Lawrences 17.

Harlem will have this weekend off and head to Shelby, March 5-7 for the Girls Northern B Divisional.

The Turner Tornadoes entered the District 9C Tournament as the No. 3 Seed but will be heading to the Northern C in Great Falls this week as the No. 2 Seed following a stellar performance on the court in Havre this past weekend.

The Tornadoes began the tournament with a contest against the Chester/Joplin-Inverness Hawks. Lacy Maloney connected twice from downtown in the opening frame and junior Shyan Krass scored 11 second quarter points to lead the Tornado offense and give the team a 31-20 halftime lead over the Hawks. Anything can happen at tournament time and the Hawks certainly weren't bowing out. The two teams matched each other score for score for the most part in the third and entered the fourth quarter with Turner holding a 41-29 advantage.

The Tornadoes had trouble getting anything to fall down the stretch scoring just four points, but they were still solid on defense and were able to keep the Hawks at bay in securing a hard fought 45-39 opening round win. Krass had a huge night for the Tornadoes scoring 17 points while also clearing the glass for 19 rebounds. The dominance didn't stop there as the powerful post also recorded six blocks and two steals. Maloney added 11 points and senior Sarah Billmayer contributed 9.

In the semi-final the Tornadoes and North Star Knights played an epic contest in which neither team held a significant lead. North Stars biggest advantage was seven while the Tornadoes held a lead of six at one point. The game featured eleven lead changes and two ties in a thrilling game to watch for all in attendance.

Both teams heated up offensively down the stretch, scoring 24 apiece. Billmayer made a living at the free throw line converting on 10 of 14 attempts. Krass was 5-6 from the charity stripe and with the teams matching each other point for point on the scoreboard Turner was able to secure a well deserved 58-54 win.

Krass again was a dominate force scoring 21 points and grabbing 17 rebounds to go along with 3 assists and 2 blocks. Billmayer finished with 23 points going 15-22 from the free throw line and dishing out 6 assists.

In the Championship Saturday night the Tornadoes took on the undefeated Fort Benton Longhorns. Turner played hard start to finish but the Longhorns were locked in and never allowed Turner to establish themselves steadily building on a 18-10 first quarter advantage. In the end the Longhorns would claim the win 58-41 making the Tornadoes the No. 2 seed.

The Hays/Lodge Pole Thunderbirds have had a magical season and following a District 9C Tournament 32 years in the making the Thunderbirds are headed back to the Northern C Divisional for the first time since 1988.

The Thunderbirds, under the direction of Head Coach, Corey Morgan and Assistant Coach Gemma Mount, have put an incredible amount of work in during the off season for the past three seasons looking to turn around a team that was 0-20. All that hard work is starting to payoff and then some. 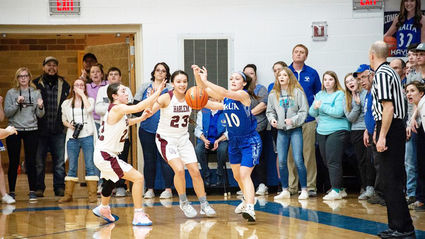 The Lady Cats completed their second half comeback against the M-ettes in the championship with complete defensive effort that complimented the offense perfectly.

In the Thunderbirds first meeting with the Bears they were led by the effort of senior Mulleeah Stiffarm with 21 points seven rebounds and four assists. Stiffarm finished 8-12 from the field including 3-6 from beyond the arc. Sophomore Judemiah Gray added 14 and junior Ella Messerly 13 in the win.

Against the Longhorns freshman Nashone Shambo led the team with 8 points. Messerly paced the teams effort in Saturday mornings win over the Hawks with 23 points. Stiffarm added 18 points, 11 rebounds and 6 assists.

In the consolation final the Thunderbirds were paced by Messerly and her 14 points while Stiffarm was again solid with 12 points 12 rebounds and eight assists.