South of the Border: "The Whitlash church steeple: The rest of the story." 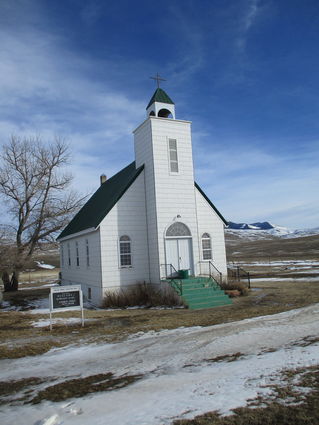 The Whitlash Presbyterian Church building was completed in 1951. The steeple, visible in this photo, was added in 1973. The steeple was built by the late Edgar Woods. The addition was in honor of William and Mary Schafer, longtime ranchers in the Sweet Grass Hills and active members of the church. The Schafer's adult daughters, at the time of the steeple addition, both lived in the Seattle area and acquired a ship's bell for the church's steeple.

Dale Mailand, from Harlem, asked me for a digital photo of the Whitlash church's steeple and belfry. I sent the photo and shortly received a poem Dale wrote about the building and installing of the steeple, an event that happened in 1973.

Dale Mailand is an original member of the Montana Country Poets and Pickers, a group that has gathered for 25 years, meeting in Chinook for the last several winters. Dale's also a retired teacher, a former postal employee, a gunsmith and a self-described "Mr. Fixit." Here's the poem he sent