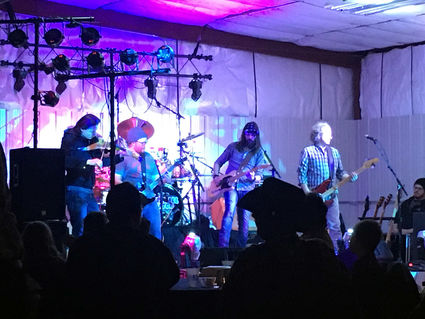 The Marshall Catch Band certainly lived up to their motto of providing "A Night of Hi-Octane Rock & Country" to all who attended their show at the Blaine County Fairgrounds Commercial Building this past Friday. A great Prime Rib Dinner was also served to those who braved the weather and was described as superb by many.

The Blaine County Fair Foundation has been hard at work for quite some time raising funds for a new indoor arena at the Blaine County Fairgrounds. There certainly have been some very positive results in the past but as with any fundraising efforts, things don't always go your way.

This past Friday the Fair Foundation presented area supporters with the sounds of the Marshall Catch Band for "A Night of Hi-Octane Rock and Country" at the Commercial Event Building located on the Fairgrounds.

Inclement weather and recent circumstances gripping our country limited those in attendance to a minimum. "It was a really good concert, people really enjoyed the band and the show they put on," stated event organizer Debbie Ramberg. "I had a ton of compliments on the food and the people that did show up seemed to really enjoy themselves."

Ramberg went on to say that the Blaine County Fair Foundation will remain steadfast in their fundraising efforts in hopes of getting the indoor arena completed as soon as possible.

With the rave reviews for the band and the food she was thinking a concert later in the spring with the Marshall Catch Band returning to play another set may be something the Foundation can get put together.

Any future fundraising efforts by the Blaine County Fair Foundation will be passed on to our readers as we get the information.