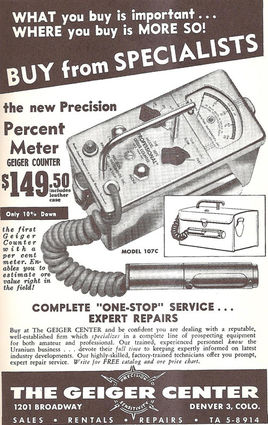 Pol Haldeman's mother bought a Geiger counter in 1956 with the idea of looking for uranium deposits. Many 1950's ads for Geiger counters, like this one, appealed to people hoping to find uranium to mine as the U.S. ramped up research involving atomic blasts.

Pol Haldeman has lived on a ranch south of Cleveland in the Bear Paws since his family moved west from the Chicago area in 1954. He shared a story he thought readers might find interesting about his mother buying a Geiger counter. The federal government started using the Nevada Test Site (about 60 miles northwest of Las Vegas) in 1951 for research about atomic energy and weapons. Pol's mother figured with the up-tick in research there would be an increased demand for uranium. She ordered a Geiger counter with the idea to locate uranium deposits.