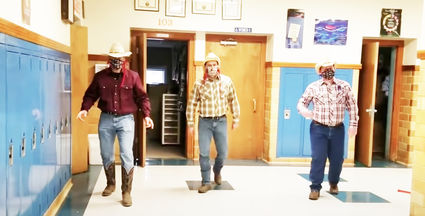 As a way to escape all of the serious news and to bring a little humor to their students, principals from across Montana have been performing and posting videos to the YouTube channel. Many feature lip syncing and acting, some highlight dancing and singing, others are a combination of talent.

According to the Bozeman Daily Chronicle, Eric Fisher, Principal at Manhattan Middle School, started the trend and challenged other area principals to post videos of themselves dancing in their empty schools. When Matt Molyneaux's sister Fran began seeing these videos online, she bet her brother wouldn't do it.

According to Molyneaux, "There were principals across Montana doing this and posting the videos as 'principal challenge videos.' My sister saw it and basically dared me. Mr. Bartshi and I wanted to put something together, so I picked the song and rewrote the lyrics. Mr. Hannum was all in, as well."

The video, which is approximately three and a half minutes long, was a cooperative effort. Former Sugarbeeter Coach Dan Rask, who is married to Molyneaux's sister Carla, recorded and arranged the guitar music; Paula Molyneaux filmed the video; and Megan Molyneaux edited and assembled the video footage, combining it with the music.

A particularly relatable stanza in the song captures the current situation:

Social distancing is here to stay

Remember, it's six feet away

So for now, we'll catch you online or talk through a Chromecast

We'll make the best of the situation

Staying strong for the orange & black and the red, white and blue

In addition to the three Chinook school administrators, the video features a montage of photos from Beeter Buddy days earlier this fall when high school athletes interacted with students at Meadowlark Elementary School.

"It is meant to be a humorous video, obviously, but also a shout out that as a Beeter Nation (the black and orange) and as a country (the red, white, and blue), together we can get through this," Molyneaux explained.

Uploaded on April 17, the video had 8,789 views by Saturday morning, April 18. It picked up a few more views during the week, closing with 10,419 views by the morning of April 24. Adding to the humor, as the video concludes and the credits roll, two disclaimers say: "No stunt doubles were used in the making of this film. No mops were injured in the making of this film."

Anyone who hasn't seen the video can view it at https://youtu.be/g4nK3DAw2c8.