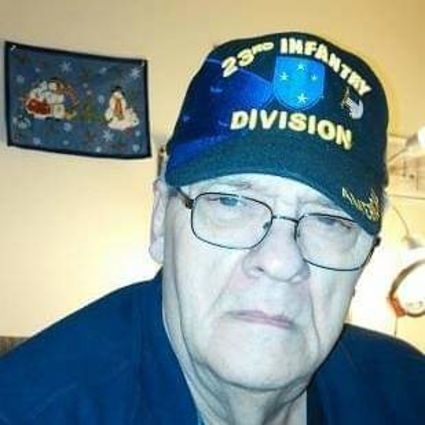 John B. Gideon, 70, of Chinook, Montana stepped across the threshold of Heaven and was met by the embrace of Jesus on Saturday, April 18th.

John was born on January 20th, 1950 to Clarence and Reverend Henrietta (VanDercar) Gideon in Zion, Illinois. His school years were spent in Wheatfield, Indiana. As a boy, John was stricken with rheumatic fever leaving him paralyzed from the waist down. Several years later, and fully recovered, he proudly enlisted with the US Army serving a tour in Vietnam with "the greatest men to have ever lived" in B 3/1 11th 1968-69 on LZ Liz as a combat infantryman. Upon returning home he received a Purple Heart alongside his Brother in Arms Arthur "TT Bear", Frederick.

John was a jack of all trades throughout his life working as a grave digger, hospital orderly, grain elevator operator, and cook. His favorite employment years were spent at Milk River, Inc in Glasgow. The clients became like family and he visited them even after retiring.

He was also a proud Glasgow community member for many years. He helped initiate the Neighborhood Watch program for Northern Heights, helped run the Youth Center on Saturday nights, was a popular landscaper, and also an EMT.

In his "free" time John enjoyed attending church. He was a published poet, and relished in many family activities including camping, fishing, bird watching, puzzles, collecting sports cards, and reading his well-loved Bible.

John, above all, was a deeply devoted family man. He loved sharing his love of Jesus, music (The Beatles were his favorite band), and nature. He instilled in us a strong work-ethic, the power of a hug, the art of perfectly-timed humor, perseverance, and compassion for his fellow man.

He is preceded in death by his parents, sister Elsie, brother Larry, and granddaughter Elizabeth.

John is survived by his wife Peggy, children Evaana and Shalee (Michael) of TX, Maggie (Jason), David, Mikhala (Stuart), Bailey, Eli (Chasity), and Jonnie (Bryce) all of Montana. His sister Esther (Ted) of OR, his cousin Bert of Idaho, 34 grandchildren, 5 great grandchildren, and many nieces, nephews, friends and Brothers in Arms.

Our Daddy is finally free from his pain. He sleeps.

John's viewing was held at the Wilderness Funeral Home in Chinook on Thursday, April 23rd from 5-7pm. His graveside services and interment were in the Highland Cemetery in Glasgow, Montana on Friday, April 24th at 2pm.