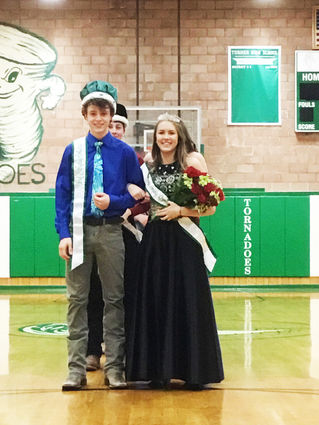 The coronation of Royalty for the 2019-2020 school year took place Wednesday, January 29th at the Turner School.  A fun evening was had by all watching all the kids celebrating with a float presentation, pep rally, dinner, and the royalty all dressed up and coronation presented.  Shyan Krass was named Princess and Shane Kimmel, Prince.   Shyan is the daughter of Lorin and Jill Krass. She plays basketball for the Lady Tornadoes and is in track.  She is also a member of the Wildcat Volleyball team.  She is in National Honor Society, DC Club, PepClub, Student Council, Youth Group, and  BPA.  Shane Kimmel is the son of PJ and Tricia Kimmel.  He plays basketball for the Tornadoes.  He is involved in Youth Group, Yearbook, Pep Club, BPA, and is currently the Student Council President.  Both Shyan and Shane are Juniors. Sarah Billmayer and Jack Harmon were named King and Queen.  Sarah Billmayer is the daughter of Adam and Shawna Billmayer.  She is a member of the track team and the Lady Tornadoes basketball team.  She has been selected for all conference and the all state.  She was on the Wildcat Volleyball team where she was also All Conference.  She is ib Youth Group, Pep Club, DC Club, National Honor Society, and Student Council.   Jack Harmon is the son of Jon and Shelly Harmon.  Jack is a member of both the Tornado basketball and Track teams.  He is also a member of the National Honor Society, Youth Group, and Yearbook.  Both Jack and Sarah are Seniors at Turner High.  Congratulations to you both! 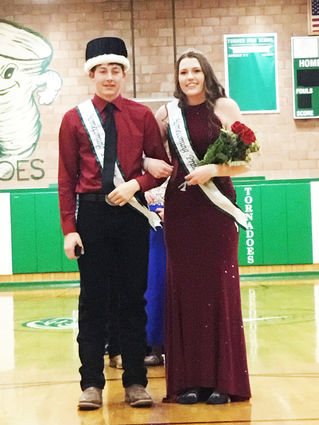 Brandi Calvert, a Junior at THS, is the daughter of Brian and Karensa Calvert.  She is a member of the Lady Tornado basketball team and the Harlem Wildcat Volleyball team.  She is active in National Honor Society, DC Club, Pep Club, and Student Council.  Brandi was escorted by Sophomore, Shay Humphreys.  Shay is the son of Steve and Denita Humphreys.  He is a member of the Tornado basketball team and plans to play golf with the Harlem Wildcats this Spring.  He was a member of the BPA, and is involved in Youth Group, Yearbook, and Pep Club. Junior, Brooke Reed was escorted by Junior, Austin Welsh.  Brooke is the daughter of Steve and Anita Reed.  She plays basketball for the Lady Tornadoes and volleyball for the Harlem Wildcats.  She is a member of the Turner Lutheran Church, Youth group, National Honor Society, BPA, Pep Club, Student Council and DC Club,  Austin is the son of Kurt and Julie Welsh.  He plays basketball for the Tornadoes and is on the Harlem Wildcat football team.  He is involved in Youth Group and BPA. Lucas Grabofsky and Gracie Zellmer filled in for last year's King and Queen who weren't able to attend Homecoming this year.   They are both second graders at Turner.  They helped crown the King and Queen and also the Princess and Prince.  Gracie is a daughter of Elissa and Jordan Zellmer of Hogeland, and Lucas is a son of Sadie and Matt Grabofsky of Turner.