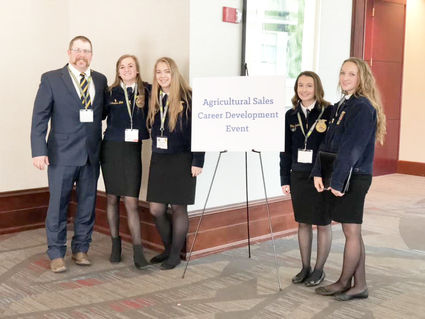 Former Sugarbeeter and 1999 Chinook High School graduate, Eric Tilleman, has been named the Agricultural Education Specialist at the Office of Public Instruction (OPI) in Helena. To his new position, Tilleman will bring not only sixteen years of teaching experience gained in the Agriculture Education program at Cascade Public Schools but also his service as the FFA advisor for that same number of years.

According to Tilleman, OPI tried to recruit him a couple of times. "I filled in for one guy who retired a few years ago, but when the position opened in that go around, I turned it down. But now seemed like a good time to make the transition to a new position."

Tilleman will take over for Shannon Boswell, who was recently promoted to the Interim Division Manager for Career and Technical Education at OPI. "She will be the Program Director and my direct supervisor," Tilleman reported.

In leading Montana's Ag Education effort, Tilleman will be filling a role at a time when agriculture science is changing and students can participate in programs that offer multiple pathways from which they can receive exposure to various ag-related occupations. Although his primary responsibility will be to oversee curriculum for Ag Education in Montana Schools, Tilleman will also manage federal programs like the Perkins V Grant Program and state funds like Career and Technical Education and Advancing Agriculture.

Perkins V, the Strengthening Career and Technical Education (CTE) for the 21st Century Act, was signed into law by President Donald Trump on July 31, 2018. This bipartisan measure reauthorized the Carl D. Perkins CTE Act of 2006 (Perkins IV) and continued Congress' commitment in providing nearly $1.3 billion annually for CTE programs for our nation's youth and adults.

Tilleman will also be assisting high schools that want to start, develop, or grow Ag Ed and FFA programs. "My interaction with students won't stop. I will just be acting in a different capacity that allows me to go out and judge FFA competitions, for example."

Although Tilleman will commute from his home in Cascade and report to an office in Helena for one or two days a week, he will spend a large part of his time travelling the state.

"The best part of my job will be visiting teachers, touring their ag programs, and seeing how others are performing. I will have more of an impact on a greater number of students since I will discover cutting edge ideas and then find ways to distribute them to others for implementation," Tilleman stated. "As I discover the needs in ag education with regards to curriculum and funding, we can build the ag atmosphere!"

The program that Tilleman will oversee at OPI is designed to develop knowledge, skills, attitudes, and experiences in and about agriculture. Ag Ed prepares students for further education, self-employment, entry-level jobs, and consumer awareness in the agriculture industry. Vocational Agriculture, as it was formerly called, was started in Montana in 1917 with the passing of the federal Smith-Hughes Vocational Act.

"I have received loads of support and kind words about my new endeavor as the new Ag Ed Specialist, and I appreciate that. I have been so blessed to have had the opportunity to teach in Cascade for the past sixteen years. My wife and I are excited to still be part of our community but in different roles," Tilleman said.

Tilleman's wife, Roberta works as a surgical tech with Benefis Health System in Great Falls, so both will commute several miles in opposite directions as they follow their career paths.