Turner Graduation 2020 took place in the Turner Park, following recommendations set by the Blaine County Health Department, this past Saturday, May 16, 2020.

A welcome was given by Tony Warren, Superintendent of Turner Schools. Jack Harmon introduced the guest speaker, Mr. Alan Van Voast. He gave some very encouraging advice to both grades graduating.

A parent presentation was given to music on the sound system. Long stem roses were given to parents and close acquaintances of each of the Senior graduates.

A slide show was shown to the group of people attending and also to the people tuning into graduation on the NFHS network. It depicted photos of Sarah and Jack throughout their years of growing up and attending Turner School.

Mrs. Darlene Azure, School Guidance Counselor, then presented a few more scholarships. She announced that not all scholarships have been named for the 2019-2020 school year, so there may be more given out over the course of the next few weeks. 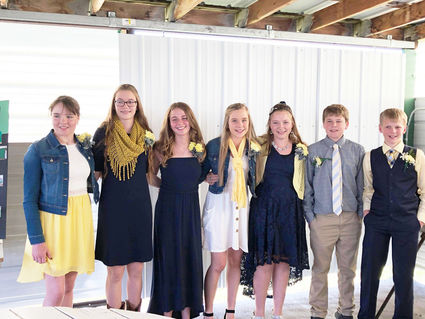 Blaine County Cruisin' Association in the amount of $500.00: Jack Harmon

A & M Aviation in the amount of 500.00 each: Jack Harmon and Sarah Billmayer

Mr. Warren presented the eighth grade and Senior High graduates and he and Mr. Shawn Beck, Chairman of the Turner Board of Trustees, presented each of them with their diplomas.

Following graduation, there was a short meet and greet (from a distance) on Main Street as the graduates cruised while the crowd waved to congratulate them. This was a different way than normal, but it was the "new normal!!" Congratulations to all the graduates!