South of the Border - Whitlash: name likely a result of poor handwriting... 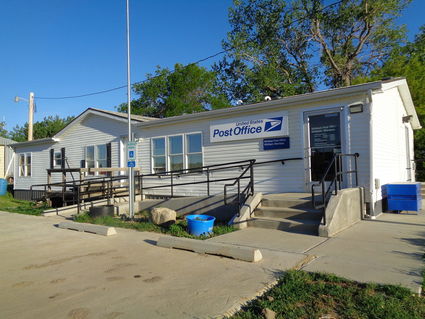 This repurposed double wide has housed the Whitlash Post Office since 2016. The structure came from the border crossing north of Whitlash when improvements were made there. It sits across the road from the old Rancher's Cash Store that housed the post office for nearly 60 years. Whitlash got its unusual name when the post office was created and named in 1892.

Columnist's note: We've lived in Whitlash since December, 2018. It's not uncommon when we tell someone we live in Whitlash for them to respond, " Whitefish, that's beautiful country. Do you like the mountains?" Then we explain Whitlash is in the Sweet Grass Hills, not the Rockies. Though never an official town or city, Whitlash has adapted and survived for more than a century.

"Names on the Face of Montana," a comprehensive compilation of place names in Montana gives scant information about Whitlash. The community is said to be the only town in the United States (and likely the world as well) named Whitlash. Yet the process for choosing the unique name seems to have been lost over time. I found some possible explanations in old news clippings compiled by Ruby Langel ("Chester Country," 1994) and other local sources. Here's some of what I learned about how the name was chosen.

The area around the Sweet Grass Hills was used by indigenous people to hunt buffalo for many years. As European pioneers moved further west land use began to change. In 1874 the U.S. International Boundary Commission, the folks charged with locating the northern border of the U.S. with Canada, pushed a road in to the Sweet Grass Hills. It was reported that there was some superficial prospecting for possible gold and silver by the soldiers accompanying the commission.

In the autumn of 1883 Fred Barnes and George Walters discovered gold while on a hunting trip in the Hills. Too late in the year to begin mining operations the hunters stayed the winter and prepared to mine in the spring. That spring more miners appeared in the Hills. The area was still part of two native reservations and not open to mining. There were reports of minor attempts to remove the miners but mining continued. During this same period livestock operators were also getting permits to graze certain areas around the Hills.

In 1888 the Sweet Grass Hills Treaty was ratified by Congress. With diminished buffalo herds, the last large hunt by indigenous peoples had occurred a few years earlier. The 1888 agreement created three Indian reservations along the northern part of Montana (Blackfeet, Fort Belknap and Fort Peck) and opened up much of the area around the Hills to settlers. By 1890 the Great Northern Railroad had reached Shelby.

With improved access to the Hills and the increase in settlers and miners in the area, a push began for a post office. At the time mail came by boat to Fort Benton. An 1892 story in the Fort Benton newspaper noted "the nearest post office to any point in the Hills is Lucille, on the Marias (River)...fully sixty miles away from the northwest portion of the Hills."

Some residents of the Hills had their mail addressed to Havre, then relied on "an occasional railroad employee to drop off the mail at Colburn." The siding was 20 miles west of Chester and depending where a resident of the Hills lived, required a 20-40 mile trip to pick up mail. Colburn eventually became Devon, a farm community that still survives on US Highway 2 in Toole County.

Choosing a name for the new "roaming" post office

There are at least two recorded versions of how "Whitlash" was chosen to be the name of what would be the first post to serve the Hills. It would be a 'roaming post office' that moved to a facility provided by each appointed postmaster. Over the years what became the Whitlash Post Office was in eight or ten different locations before ending up permanently in the center of present day Whitlash.

Paper work had to be submitted to and approved by the U.S. postal department for a new post office. The first version of how the name was selected describes how a group of local men gathered to pick a name and decided on "Whiplash"-likely a reference to freight being hauled to the Hills via horse drawn wagons. Then the story varies: the men started celebrating (drinking) and by the time the name was written down it was in such poor hand writing that the officials at the postal department misread it and the approved name ended up "Whitlash." Or, some say the group did the paperwork by poor lamp light and sloppy handwriting caused the intended Whiplash to appear as Whitlash. 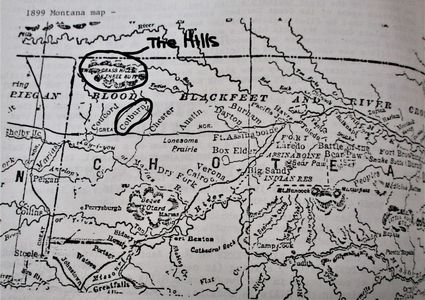 This 1899 map shows the railroad stops along the Great Northern Railroad in north central Montana. Upper center in the photo, circled, is the Sweet Grass Hills area. Prior to the approving of the Whitlash Post Office many residents of the Hills had their mail addressed to Havre where a railroad employee would drop it at the Colburn siding (also circled), necessitating a 20-40 mile trip to pick up mail. When the Whitlash Post Office was approved it became the first 'inland post office' for mail headed north from Fort Benton.

The second version, in my opinion less interesting than the first, is that the first postmaster submitted the last name of a local miner, "Whitlach," and the spelling came back Whitlash. There is a local story (maybe an urban legend) that a fellow with the last name of Whitlash once came to see if some of his relatives were the source of the name only to find no historical record of the family name in the area.

The Whitlash Post Office was likely first located at Hill, a rural community south of East Butte and about 10 miles southeast of Whitlash. After a few intervening moves the facility came in 1905 to the original townsite of Whitlash on Half Breed Creek just west of the current community. Still a roamer facility, the post office followed the postmaster to several different locations over a period of about sixty years. In 2016 the Whitlash Post Office was moved to its now permanent location. It's a repurposed double wide mobile home acquired when the border crossing six miles north was updated a few years ago.

So, some sort of a mistake resulted in the Whitlash name as opposed to the planned Whiplash. Interestingly, another mistake in translation of the native name for the Hills resulted in the incorrect naming of the Sweet Grass Hills. But that's a story for another day.