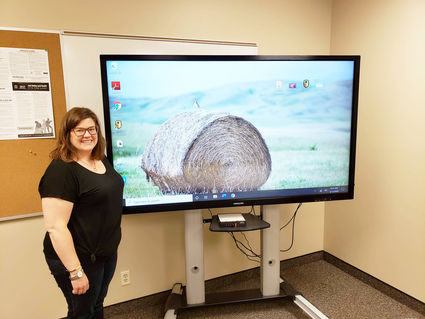 Many, if not all of these changes will be utilize moving forward but not all improvements have been implemented as a result of COVID-19 mandates.

Beginning in the fall of 2019 Blaine County District Attorney Kelsie Harwood began looking into purchasing technology that would improve drastically the way evidentiary procedure takes place within the court room.

Harwood approached the Tri-Agency Task Force for assistance in procuring this technology.

"Blaine County is a member of the Tri-Agency Task Force, a local drug task force, consisting of members of local law enforcement agencies across the Hi-line. The Task Force's criminal drug investigations in Blaine County are an integral part of fighting the drug problems in this region. The majority of felony and misdemeanor crime in Blaine County has a nexus to illegal drugs, most commonly methamphetamine," stated Harwood.

Since the Task Force began it has assisted the Blaine County Attorney's office in securing funds and assets subject to seizure through criminal proceedings.

Whenever an individual is found guilty and convicted of a drug offense the state can seek seizure of that individuals property and assets to include monetary funds and property. This has proven to be one of the states most effective deterrents and punishments.

Harwood's office is very involved in this process and seeks seizure whenever possible. The task force had seized roughly $3,000 in a case last year and Harwood began the process of requesting funds to update evidence presentation technology for the courthouse.

After roughly three weeks, from the time of request, Harwood had procured the purchase of a 75" Samsung touchscreen computer smart monitor as well as a HP ProDesk 405 G4 mini desktop CPU, and a mobile monitor stand.

Prior to the purchase of this equipment the Blaine County Courthouse did not have an integrated electronic evidence presentation system. The County Attorney utilized a projector and projection screen to display evidence during a jury trial and other court hearings.

This system was antiquated and was soon to be an obsolete form of video evidence presentation. In order to continue to reduce illegal drug distribution, possession and use in our communities, prosecution and conviction at trial is imperative. The new computer and monitor allows the County Attorney's Office to use technological advancements and to put on the best evidence possible. The system will be used to present video evidence, photographs, maps, or other types of relevant evidence.

In the past the jury may have been handed a paper document to look over and then pass to the juror next to them that same piece of evidence.

This way of presenting evidence often led to the individual juror having to choose between looking at the evidence thoroughly or listening to the testimony being presented at the same time. 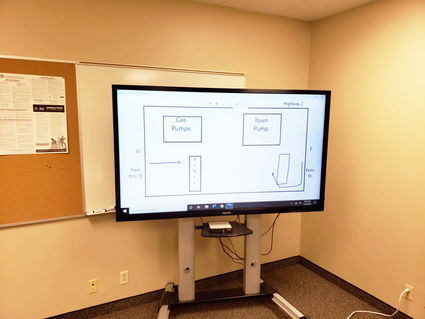 New video technology purchased by the Blaine County Courthouse to assist with evidence presentation is shown above. In this image it displays to the jurors eyewitness testimony to a hit and run at Town Pump.

Often times Deputies and Officers presenting their own evidence, such as witness statements or Blood Alcohol Content (BAC) results had the same effect on the juror.

The new technology gives the juror the opportunity to view the evidence via the 75" monitor while listening to the testimony side by side making it easier to take in both forms of evidence.

The Blaine County District Courtroom and the Blaine County Sheriff's Office have also been able to utilize the new audiovisual equipment when conducting concealed carry training. Further, the computer equipment has been utilized for several virtual meetings through Zoom and other platforms during the COVID-19 pandemic. Blaine County was able to meet with the Fort Belknap Indian Community Tribal Council and hold Board of Health meetings virtually with use of the new system.

Any office within the courthouse has the ability to use the system as well as the city police department should they ever want to request it.