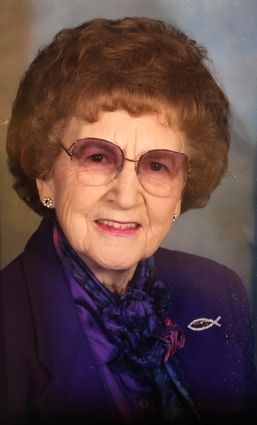 Longtime Turner resident, Adrienne Phyllis Hutton (92) went to be with her Lord, her husband Graham and daughter Karalee on February 27, 2020. Born on October 2, 1927 to Fred and Mary Acelia Richards of Orkney, SK, Canada, she was the fourth of five children born and raised on the family farm. She attended country school until the family moved into Orkney when she was 11. On New Year's Eve 1945, she met Graham Hutton of Turner, MT at a dance in Climax, SK. He had recently returned from overseas duty with the USMC. They were married November 27,1946 and began their life together in a sod house on the Ralph Hutton place north of Turner. In 1948, they bought the Frank and Alice Jones farm/ranch and it was here that Adrienne and Graham raised their family: Phyllis, Linda, Cheryl, Karalee, and Miles.

Adrienne was a wife, mother, and homemaker and everyone was welcome at her table. She was an excellent cook and was skilled at cooking for large groups. She was an early member of the Turner Christian Church and was baptized in Petrie Dam by Orin Hardenbrook. Being a devout Christian, she loved to minister and taught Sunday School and vacation bible school for many years. She was active in the American Legion Auxiliary Post #109 and was a longtime member of the Modern Mrs. Club.

In 1989, she and Graham sold the ranch to their son, Miles, and moved to Havre. Adrienne really enjoyed the conveniences of town life after many years on the farm. Upon moving to Havre, she became a member of St. Paul's Lutheran Church and later 5th Avenue Christian Church. She enjoyed music, often whistling, and singing her favorite hymns, and took up playing the piano. She sang and whistled Christmas songs all year round. Quality time with family was especially important to her. She spent countless hours playing with grandchildren and they have many special memories of her teaching them in the kitchen, reading many stories and playing games. Adrienne was an avid reader and loved crossword puzzles. Traveling to reunions and visiting family and friends were some of her favorite things to do. She and Graham enjoyed several trips to his 2nd Marine Division reunions. The last few years she lived at Ruby House in Great Falls where she shared a room with her good friend, Evelyn Hedstrom.

Adrienne was preceded in death by her husband Graham, daughter Karalee McCoy, granddaughter Deinna Thompson Mello, her parents and brothers Harry, Lorne & Dwayne Richards. She is survived by her children: Phyllis (Jim) Fitzpatrick of Dupuyer, MT; Linda (Joe) Shaw of Magna, UT; Cheryl (Bill) Thompson of Ely, NV; and Miles (Linda Johnson) Hutton of Turner, MT; 15 grandchildren, 20 great-grandchildren, 2 great-great grandchildren, her sister Gwen Lacey, and sister-in-law Alvina Doyle. Services will be held at the Turner Christian Church June 27, 2020 at 2:00 pm. Memorials can be given to American Legion Auxiliary Post #109, the Turner Park, or to a cause of one's choice.