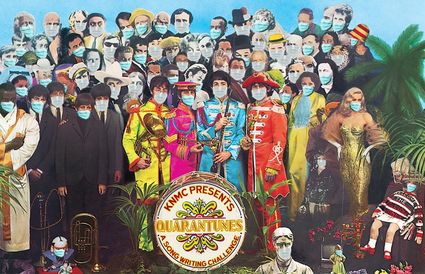 The promotional flyer for the Quarantunes: KNMC Songwriting Challenge 2020

Founded in 1954 and identifying as the "oldest college station in Montana," KNMC, broadcasting from MSU-Northern in Havre on 90.1 FM, is hosting Quarantunes: KNMC Songwriting Challenge 2020. Several songwriters are submitting their parodies or original songs each month for the competition, hoping to win this year's grand prize: a custom made leather guitar strap.

For the Songwriting Challenge, Dave Martens, who manages the radio station at the college, is posting a different challenge each month from May through August and inviting songwriters and local musicians to compose a song during these times of COVID-19. The best song of each month is being determined by a group of judges, and winners will receive monthly prizes.

"I couldn't be a judge because I basically know everyone, so I'd be biased," Martens laughed. "Regarding the monthly challenge winners, the judges are still conferring and will share their findings soon."

A musician himself who is passionate about music, Martens also works as a Speech Therapist for the Bear Paw Cooperative in Chinook. He divides his time to manage the radio station while juggling his many other obligations.

"To celebrate the work of the radio station and to get people to participate actively, we typically have a public event called 'Tribute' in the spring and one called 'Rock Lotto' in the fall, but COVID hit and prevented us from keeping that routine alive," Martens said.

Usually held in April each year, "Tribute" is KNMC's year-end celebration for MSU-Northern. It features various tribute bands who dress up and perform the music of their favorite artists.

"This year, my group was going to pay tribute to KISS. We planned to take the second s, though, and move it to the front of the name to become SKIS. Our face makeup would have been snowflakes and other wintry images, rather than stars and bat wings, and instead of platform footwear, we would have worn ski boots. I would probably have played the role of front man and rhythm guitarist, Paul Stanley. All of the music played are cover songs in a mock tribute," Martens described.

"This new reality with the Songwriting Challenge as an alternative may not be ideal, but that's what is presenting itself at this time," explained Martens. "As I select the challenge topics for each month, I am making an effort to play to and honor individual tastes while also catering to creativity."

Information on monthly topics, as well as where to submit songs, is available on KNMC's Facebook page. Participation in the event permits use, but not ownership, of submitted recordings (audio/video) on KNMC social and broadcast media.

Announced on May 1 and due on May 30, the first month's songwriting challenges were to create a short original radio jingle about KNMC and to rewrite lyrics to a well-known song about life in quarantine. Event organizers called this challenge the Weird Al YanCovid-19 Challenge.

"We generated a lot of entries with this theme," Martens said.

In order to be eligible to win May's prize-an instrument cable package from Rattlesnake Cable Company-contestants had to complete BOTH challenges.

Three of the songs submitted for the May challenge are posted on KNMC's Facebook page. With his Weird Al YanCOVID-19 song "Hey Dude," John Brownell played guitar while singing lyrics that imitated "Hey Jude" performed by the Beatles. "Hey Jude" topped the charts for nine weeks in America, where it became The Beatles longest-running number one in the U.S. singles chart, as well as the single with the longest running time.

In his version, Brownell sings about the social distancing, mask wearing and hand washing protocols we are currently enduring: "Hey, Dude, don't be afraid; perhaps you're made to be a trendsetter, to just wear it and hope others will join in. Then you'll begin to make things better."

Joe Ross did a parody of the "The Breakup Song (They Don't Write 'Em Like That Anymore)" from the 80s. The song was written by Greg Kihn and Steve Wright and recorded by the American rock band The Greg Kihn Band. Released in 1981, "The Breakup Song" was the band's second highest-charting single.

Another contestant in May, Chris Sand, also known as "Sandman the Rappin' Cowboy," confessed that his piece was written VERY last-minute for the Weird Al YanCovid-19 Challenge. In his song, "A Bug with No Name," Sand changes the lyrics to the 1972 chart-topper "A Horse with No Name," performed by the folk rock band America, and makes the claim that the coronavirus started in Havre when a bat crapped in his stew.

Taking a more original route, June's Challenge was Summer Jam. According to Martens, a summer jam is a song that is considered ideal for listening during summer activities. In his directions for this challenge, Martens suggested: "However you define ideal and whatever those activities are, we always encourage collaboration, so don't be afraid to reach out to your music community to finish a song or add additional instrumentation. KNMC encourages collaboration that adheres to all recommended social distancing guidelines."

A.j. Rucinsky was the first musician to submit an original track for June's challenge. A multi-talented artist/musician, Rucinsky designs many of the flyers that KNMC uses to promote its events.

"A.j. is really talented and fast with his art," Martens said. "The image he created using the Sgt. Pepper's album cover to provide a 'brand' for our Quarantunes summer event captures it in all of its originality and uniqueness."

Creating a parody that shows everyone wearing masks, Rucinsky repurposed the cover from the Beatles' eighth album, "Sgt. Pepper's Lonely Hearts Club Band," which became the soundtrack to the "summer of love." Released on June 1, 1967, the album features music that was just as colorful, different, and exciting as the way it was delivered for that time period.

Taking his inspiration from that colorful difference, Rucinsky wears an alien mask in some of his sets and plays every instrument on the recording video for his Summer Jam song called "Tacklebox Times." 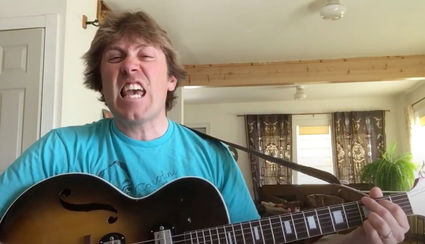 Dave Martens performs his KNMC jingle for the May challenge, singing, "Where would I be without KNMC?"

Martens encourages participation in the next songwriting challenge, which was released today. July's topic is to write a movie soundtrack sequel song. Option 1 invites musicians to rewrite or reimagine a famous movie soundtrack song for a sequel or a completely different movie. By way of explanation, Martens offered this example: "Rewrite the Ghostbusters theme song for Apocalypse Now or take the theme for Footloose and change it to fit the sound track for another movie, say, The Texas Chainsaw Massacre."

Option 2 is to write an original soundtrack song for a movie that needs one. Lifetime movies-those made for TV movies with plots that resemble stories ripped from the pages of the tabloids-are acceptable. Songs must be submitted by Friday, July 31.

Martens referred to KNMC as a cooperative enterprise. "That means we depend on many volunteers to keep the station running. Our mission is to provide a college radio station to students and community members that enhances campus activity awareness, information, and music with the hope of generating interest and open, active discussion and participation in local, national, and global events."

Their Quarantunes: KNMC Songwriting Challenge 2020, with its relevance and currency, contributes to fulfilling that mission.