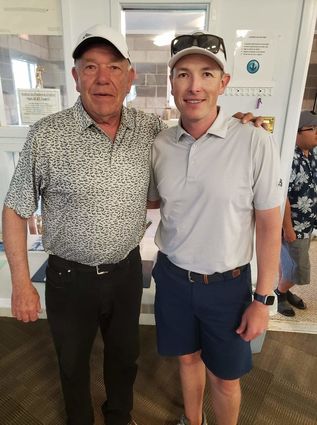 Ed Obie and Byron Olson were the overall Gross winners of the 5th Annual 27 Hole Triple Play Golf Tournament this past Saturday at the Chinook Golf Course. The pair shot a total score of 108 to win by one stroke.

The Chinook Golf course welcomed 68 golfers making up 34 two person teams on Saturday, June 27 as they competed in the 5th Annual Triple Play Golf Tournament. The format began with each team playing a best ball format for the first nine holes. They followed that with nine holes of alternate shot and concluded with a nine hole scramble. Teams were auctioned off in a calcutta for the scramble.

The tournament is a huge fundraiser for the course and requires a strong volunteer effort by club staff, members and the community in general. The day began with a wonderful breakfast prepared by Shiloh...