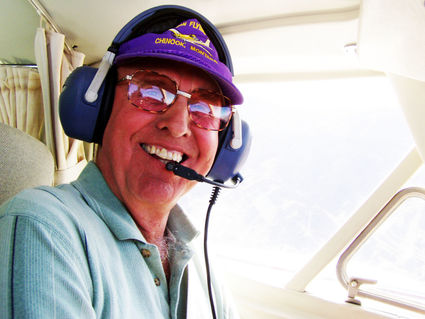 John Hebbelman is a lifelong resident of the Chinook area and Blaine County, spraying crops along the Hi-line for the past 55 years and flying planes for 60, being an aviator has defined who he is. On February 20, 2020, John learned that he had become the 84th recipient of the Wright Brothers Master Pilot Award. John also became the first Blaine County pilot to earn the prestigious honor.

To be eligible to receive the award it takes years of dedication to win. There are three major requirements, the first being 50 years of piloting planes in either the civilian or military fields or a combination of both. The 50 years is not required to be continuous. A pilot must also be a holder of ACA and or a FFA pilot certificate. Potential recipients need to submit an application or be nominated for the award. John surmises that he was nominated for the award by Willie Hurd of the Havre Area Pilots Association after having been asked for his resume of his time as a pilot back in the fall of 2019.

John began the process of obtaining a pilot license back in 1959 taking lessons from Ed Obie Sr. alongside his father John Hebbelman Sr. Both John and is dad received their private license near the end of 1959. Ed began the training but eventually Buzz Stanton came up from Billings to finish soloing him.

The pair were bitten by the flying bug after his dad purchased a 1/7 share of a 1947 8A Luscombe. Shortly after earning their student license the bought a 1952 Cessna 172. To earn their student license, each was required to perform three successful landings and all of the training and testing was done right here in Chinook. John and his dad later earned their private license in 1963.

To obtain their private license they were required to perform 40 hours of solo flying before taking a written, oral and practical flying exam. John's father remained as a private pilot from that point on.

In 1965 John earned his commercial license and immediately bought 400 acres of land adjacent to his parent's place. John acquired the property from a neighbor in which the family had been renting the property from for years. That same year John purchased his first plane, a 1952 PA18 with spray booms and a tank. Eventually he went on to purchase IA, CFI, Instrument, Seaplane, Multi, MEI, Helicopter and CFII aircraft.

John's father ran cattle on his land and eventually John himself had bought 175 cattle of his own. While John and his dad ran cattle on the land, his major reason for buying the property was to build a hangar and buy a plane. John bought his first crop duster that very same year and has been in business ever since.

Hebbelman Flying Service began providing a very necessary service to the area in the fall of 1965. Through the years John has been busy flying and spraying crops around Loma, Big Sandy, the Kremlin area, over to Malta and all throughout Blaine County in the 55 years since.

John flew for more than 20 years dusting crops for the Donovan's outside of Kremlin, the Bitz's out of Big Sandy, the Worrall's in Loma and the Blatter's in Phillips County. He also sprayed for nearly everyone in Blaine County at some point.

In John 60 years of flying he has left his airplane behind just one time. Back in the early eighties, he estimates around 1982 in Butte, Montana, after he and a group of his fellow EMT's were stranded in Butte during a October convention after a major snow storm hit the area.

They had arrived in Butte that Friday in good weather but suddenly the storm came through and John and is EMT buddies were forced to find alternate means of travel back home. Fortunately, there were many other crews from the hi-line that we're more than willing to help the crew get back home.

Through the years John has never crashed his plane and has returned home safely every time. On six occasions he encountered engine failure and safely landed the plane. After repairs were made, he was able to fly the plane home. 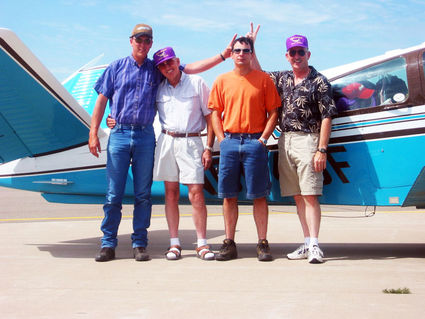 One thing John has taken great pride in is instructing new pilots. This photo was taken in OshKosh, WI with three of John's former students before they were married - John Harmon, Alan Van Voast and Randy Ross. All are considered friends and great students.

The first such occasion was at Larry Sterrett's place just outside of Chinook after the tip of the propeller flew off. Next with his student Bill Thompson in his own plane, they encountered engine rod failure and had to set the plane down at night in a field. Third occurrence came on a return flight from Oklahoma in a plane he was having modified for an Air Race to Reno, NV (He never made the race). The fourth failure included jet prop and prop gear failure where he had to glide 26 miles to Ontario, Canada before making repairs and flying home. Later, during another night cross country flight the cylinder head came off. He managed to return to the airport before eventually flying back home. Lastly engine failure on a flight outside Yuma force him to return to the hanger safely.

Nowadays John is 'semi-retired' and he and his wife Angie spend 6 months in Yuma, AZ, along with 6 months at home in Chinook. John and Angie, a Billings girl, were married in 2009 and have enjoyed their time together in both locals. John still does some spraying, in fact the morning of my interview with him for this story he had sprayed 350 acres. John does a lot of instructing including a few clients in Montana. In Yuma he is a full-time instructor at the Marine Base in town with three pilots currently receiving fixed wing aircraft instruction from him. He still enjoys flying friends and family on fishing trips to Mexico and Canada as well.

John will be presented his Wright Brothers Master Pilot Award on Thursday, July 13 at the Edgar Obie Airport in Chinook.