First Sergeant Miller Retires from the U.S.M.C.: A Class of 2000 Graduate of Chinook High School, Miller is Recognized for 20 Years of Exemplary Service 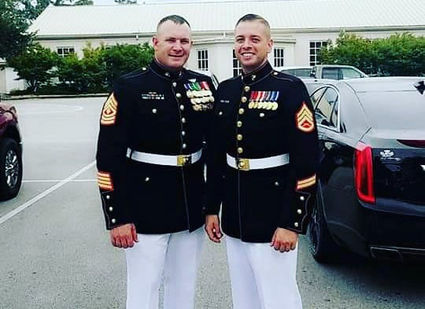 First Sergeant Josh Miller retired recently from the United States Marine Corp after 20 years exemplary service. Miller (left) is pictured above with Rob Lapp a member of Miller's last unit in the Corp.

First Sergeant Perry Joshua Miller retired from the United States Marine Corp (U.S.M.C.) recently and was well honored with a ceremony in North Carolina. Miller entered the Delayed Entry Program for the U.S.M.C. in August of 1999. On July 23, 2000 he reported to boot camp at M.C.R.D., San Diego and graduated in October 2000. 20 years later, having served the bulk of his enlistment, Miller retired from the Corp Honorably.

Originally Miller had plans for nearly 40 friends and family to attend but with the COVID-19 pandemic changing the way we go about things only his Father, a Marine Corp Vet...