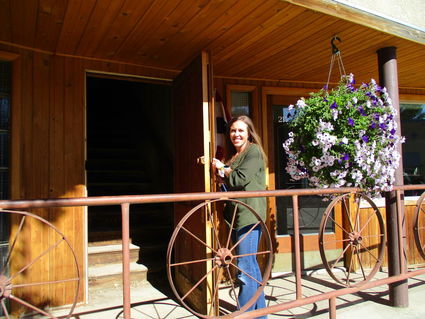 Lesley Zellmer, one of the owners of the building where the Chinook Opera House is located, shows how the old theater and ballroom was accessed directly from the street. Originally the stairway was open from the street. About halfway up the stairs, two doors blocked access to the facility at a stairway landing. A "back entrance" served as a fire escape to the alley but was sealed off years ago.

In November, 1903, the new Chinook Opera House hosted a grand opening ball that attracted 500 guests. A couple of weeks before the grand opening, the "Chinook Opinion" described the new facility as "...worthy of our pride and would be a creditable in a city of the population of Great Falls." The writer noted, "...the residents of Chinook and vicinity have deplored the fact that we had not a theatre or other place of amusement worthy of a large and wealthy population."

A writer described the new Opera House as "...in every way modern and up-to-date." The stage, framed by a stylish Proscenium...