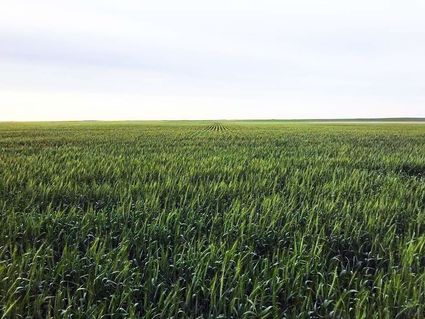 Timely rainfall across the Hi-line in the first four weeks of summer has put a huge smile on area grain producers faces. Picture above is Jon Harmon's spring wheat on the Big Flat. Jon said, "This is incredible, simply amazing! The timing of the rain, the amount has been perfect. I have never seen our crops look this good before." Producers are encouraged by their current situation and with a good second half to the season this could be a very good year.

Area grain producers are all smiles after a number of recent rains have dropped an unusual amount of moisture on their crops to start July. For many producers this year's crop looks fantastic and hopefully the second half of the season is as good as the first. The area has had more rain at times through the years, but the timing of this year's rain seems to be on point and separates this summer from the rest.

More often than not when the calendar notes the start of summer (June 20) the amount of rainfall the Hi-line receives tends to be negligible at best. This year in the four weeks since the Father's Day weekend we have had a number of storm cells come through that have brought much more than the typical thunder/lightning no moisture or very little storms of recent summers.

For the most part grain producer along the Hi-line seed mainly wheat and barley. Wheat is seeded with spring and winter wheat being planted the most. Durham, Flax, Lentil, some peas a little corn and a significant amount of hay will also be harvested this summer. Hemp is being produced as well but regulations are more stringent with the production of this crop.

In talking with a number of local grain producers the consensus tends to be the same. One of these producers mentioned that his operation seeds wheat predominately with a fair amount of barley along with some lentils. They agree with the notion that the rain has been a bit more than normal for this time of year and added that the timing has been nearly perfect, "Doesn't really matter if it's a little or a lot if the amount is enough and the timing is perfect and this year it has been. Maybe an increase in bushel production will offset any loss in value at the scale."

Grant Tilleman operates Rockin' T3 Farms and has some crops seeded north of Zurich but most of his operation is located just east of Chinook south of the old Spa Bar along Highway 2. "We've gotten a good amount of rain since Father's Day," said Grant, noting the great start to the first half of the season. "The rain has really helped fill out the heads on the wheat and they have really begun to pop. After the rain last week, they are nearly filled up. Compared to years past this year has been really good to us."

Tilleman added that, "If we continue to get the rain like we have already received our wheat protein might be a little lower, but more bushels will maybe get us ahead of where we were last year." Through the year seeding has included spring and winter wheat, some Durum as well as a little Kamut and a few peas but this year is centered around just one grain, "We have more wheat seeded this year, in fact that's the majority of our crop year."

Grant is looking forward to a great second half of the crop season, "Our winter wheat will probably be ready to harvest mid-August, spring grains will be late August early September."

Running operations north of Havre and in the Big Flat around Turner and Hogeland producer Jon Harmon is ecstatic about where his crops are at, "The best I have ever seen. It's wonderful, I'm very impressed with where we are it, it's incredible. I would say the crops right now look the best I've ever seen." 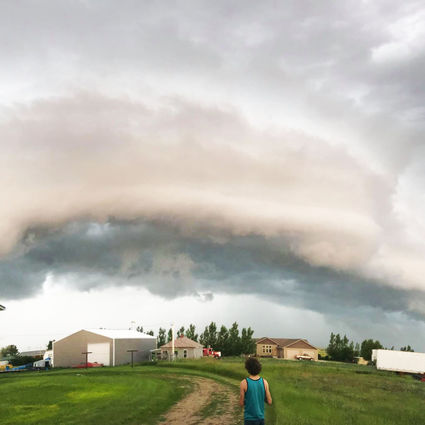 In the past, storms like the one pictured were just an impressive display of thunder, lightning and wind. This year they have brought some timely moisture to the region as well.

Jon added that many of his neighbors have stated as much to him as well and noted that he has seen some fellow producers crops along the Hi-line and says he hasn't seen one that isn't as good as it's ever been. The rains may not be record levels, but their timing has been phenomenal, "Might not be the most rain I've seen this time of year but the timing of them has been fantastic and has really boosted the crops. Hopefully we make up for any protein loss with higher bushel per acre," said Harmon.

Current market prices have been stagnant, and the local elevators are constantly monitoring crop conditions, protein and moisture levels and hold the producers to a high standard but with the inevitable give and take of the business, hopefully the gains out way the losses. "It's hard to tell how things will work out until you get to the elevator, but the crops look great, I'm happy as ever with them and hopefully more bushels per acre will get us to where we need to be and put us in a better position than a year ago," concluded Harmon.