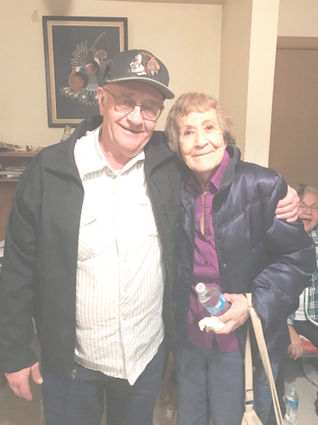 George L. Cichosz was born on June 6, 1946 to Leo and Elizabeth Cichosz. Georgie, as his older sisters fondly called him, was the youngest of eleven children. George was raised on the Cichosz family farm in the Hogeland area of Montana. It was here that George was raised in a loving family and taught a love for music, dancing, the value of a hard days work and a reverence for God.

Upon completion of his high school graduation, George worked various jobs, including hauling grain with his dad, Leo Cichosz, at Equity Co-op in Hogeland, MT. George later took a job in Harlem, MT at Bakers Service Station which would lead him to the love of his life.

George met and married Catherine (Walker) Cichosz. With this union came the children of George's heart, Lisa NeverMissashot and Stanley Warrior. George and Cathy would add two more sons, Glenn Cichosz and Raymond Cichosz. The couple moved to Hays, MT where George worked as a mechanic at the Zortman Mine. George found his home with the people of the Fort Belknap community, and was given the name čyáačiθaa' nááčyaa "Wolf Chief" by the late Elmer Main.

George was the epitome of a family man. George and Cathy opened their home to the children of the Hays community. The Cichosz residence was a safe haven and hangout for the youth of the Hays, where no one was ever turned away. George was a man of honorable character and carried himself in humbleness. He found happiness in making others happy. Georgie was loved by so many and we will miss him. Especially his gifts of eagerness to lend a hand, and offer a word of encouragement, or a simple prayer for our struggles. His laugh and distinct chuckle and so much more, will forever be a part of our memories.

George was preceded in death by his loving wife Cathy, his parents, Leo and Elizabeth; his brothers, Leon, Tom, Bob, Vernon and Joe; and his sister, Lorraine Kiedrowski.

He is survived by his sisters Mary Ann Williams, Delores Newton, Helen Dahlquist, and Barb (Glen) Lewis; his sons, Stanley, Glenn, and Raymond; and his daughter, Lisa (Paul) Nevermissashot. George is also survived by numerous grandchildren, great-grandchildren, nieces and nephews.