The Show Goes On 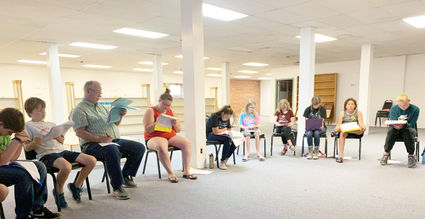 Ben Hall works with other members of the cast during a read through early in the rehearsal process for the MAT Youth Production of The Wizard of Oz.

Opening on August 6 and sponsored by Western Drug Pharmacy, The Wonderful Wizard of Oz, a Montana Actors' Theater Youth Production, will take place on the west end of the Holiday Village Mall in the old North 40 location. Doors open at 6:30 p.m. and the show begins at 7:00.

Chinook resident Ben Hall will not only serve as the production's narrator but will also act the part of Frank Baum as well as the Wizard. Baum "stage manages" his story to keep the action brisk from scene to scene. Before arriving in Oz, he was an actor, traveling salesman, vaudeville manager and newspaperman-an authen...