Who painted 80-year old mural in Chinook remains a mystery 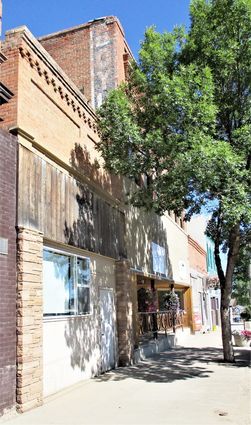 Kuhr's Clothing operated from this one story building at 223 Indiana in Chinook from 1905 until 1998 when the business closed. Started by Frank Boyle (note "Boyle" sign on south wall of adjacent building) in 1900, his son-in-law, EdJ. Kuhr, joined the business in 1931 and grandson, Ken Kuhr, in 1960. Originally the store had a glass front with the front door entrance inset from the street with a protected entryway.

When I started with the "Journal" seven years ago, the newspaper was located in the building where Treasure State Title now operates in Chinook. Next door, south, in a one story building also facing Indiana Street, was a golf simulator in the front portion and a private wood shop and a few storage units in the rear. That back door still has a painted sign that reads "Kuhr's Entrance." I knew the locale only as the Kuhr's building.

During my research on the Chinook Opera House ("Journal" story, 7-15-2020) I learned of the existence of a hand painted mural on the inside south wall of the old...