Austin Haney learns about history by living it 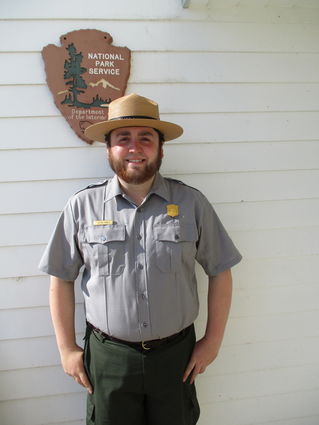 Austin Haney grew up in Great Falls and is the Interpretive Ranger for the Bear Paw Battlefield this summer. He's a recent graduate of the University of Montana and an avid reenactor. He loves learning and sharing history with others.

Austin Haney is the Interpretive Ranger for this summer and fall at the Bear Paw Battlefield south of Chinook. A native of Great Falls and a recent graduate of the University of Montana with a major in history, he's also active in several regional reenactor's groups. Reenactors learn history by mastering skills and performing life styles from by-gone eras then share what they've learned to help others understand history. He's a member of several regional groups that focus on historical periods during and around Lewis and Clark's Corps of Discovery (1804-1806) and later.

Developing a passion for history

Austin's passion for history could be described as genetic. He explained, "My mother always wanted to be a park ranger. Both my grandfathers were interested in history and would take me to visit historic sites in the region." He began reading history books in grade school. "My school had a kids' book about King George III. That's the first history book I ever read and I loved it." At U of M Austin was "a theater major for about two days, then switched to history and never regretted it."

Before college he got interested in reenactor groups in Great Falls. Neighbors took him to a reenactors meeting and Austin said, "I was hooked." Though the number of reenactor groups is small in Montana, he explained, "Because the Lewis and Clark Interpretive Center is located in Great Falls, this area is one of the best places in the nation to find information about the Corps of Discovery and that era."

He joined the Lewis and Clark Honor Guard while still in high school. Founded in 1980, it's one of the longest running reenacting groups for the 1803 to 1840's era. The group was also instrumental in raising matching funds to build the Interpretive Center in Great Falls.

Haney said, "For many years reenactor groups were mostly older guys (50 years of age and over). Nationwide there's an uptick in interest with more and more young people being attracted." This recent interest has resulted in the start of some new regional reenactors' groups in which Austin is active.

The Northwest Border Brigade, which Austin started in 2019, focuses on the 1840's-1890's. He started the Brigade to "serve some groups not well represented in existing reenactors' groups. Part of our focus is on the role of the Metis. They were mainly in Canada but also had an important role in the development of north central Montana." The Brigade already boasts about 120 members from Alberta, Saskatchewan, Montana and North Dakota.

The Department of the West, another regional group, is a "loose coalition of about 300 people interested in the history of the northwest." That group has an event set for the summer of 2021 in Fort Yamhill, Oregon with activities focused on life during the 1850's. Austin said he enjoys participating in the reenactors groups because, "It helps me better understand why things happened historically, why people did things the way they did and how those decisions affect us today." He believes, "We need to understand the past so we can learn from it."

Austin combines his interest in acting with skills he's learned as a reenactor. He's done presentations showing how fishing skills developed on the frontier and "fished using those old skills and gear." Describing himself as a "foodie," he enjoys learning and using frontiersman's skills to prepare authentic dishes and meals, noting, "My real specialty is camp stews and soups." He once did a presentation playing the role of Thomas Jefferson's French maître 'd. Wearing a period costume and sprinkling in some French he learned in school, he described a formal meal served at Jefferson's White House.

On the job with the Park Service

Austin said, "I wanted to stay in Montana for my first job out of college. I chose the position at the Bear Paw Battlefield because it was geographic area I really didn't know much about. I figured it would be a learning experience for me as well." The Bear Paw location is one of 38 sites that make up the Nez Perce National Historic Park in Idaho, Oregon, Washington and Montana. He started the first of June and will work through the end of October.

Austin's position with the Park Service involves spending time at the Battlefield helping Lead Ranger Casey Overturf maintain the facility and greet visitors. Casey said the number of summer visitors was down a bit, likely from the pandemic. Asked about interactions with visitors to the park, Austin said, "Most want to experience the site on their own. They have few questions of the rangers this year." 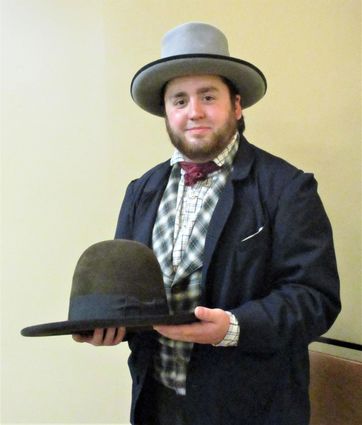 Interpretive Ranger Austin Haney sits with a part of the gear he uses for reenactments and historical presentations. He's wearing an 1850's combo of coat, tie, trousers and 'short boots.' A believer in 'living history to learn it' he's sporting a felt hat he made himself. He said he has "about 400 hats and caps." His reenactment interests range from the Lewis and Clark era to after the Civil War.

The position also involves working at the Blaine County Museum, which is the initial contact site for visitors to the Battlefield. There he shares his historical knowledge with visitors and is learning skills related to preparing and managing historical collections, a skill set likely useful for future jobs.

Austin said he loves the prairie, enjoys the small town feel of living in Chinook and likes the ease with which he can get involved in local activities. What he misses are his friends and, being a foodie, he added, "I really miss the dining opportunities in Missoula where there are a lot of great restaurants."

Asked about his dream job, Austin didn't hesitate to answer. "My dream job," he explained, "would be any situation where I can talk with people about history. The setting is not important so long so important." He added, "I'm hoping to find work in the off season so I can remain right here in Chinook until next year's season at the battlefield."