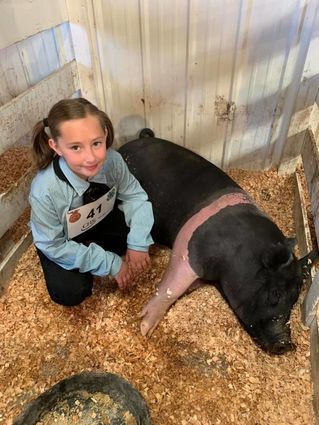 In her first year with a market swine project, Lillie Skoyen raised a Hampshire Cross named Randy that she sold in the 4-H Livestock Sale for $5.40/pound to Stockman Bank. Her favorite part of the project was giving Randy his baths.

Held both virtually through Frontier Live Sale and in-person at the Blaine County Fairgrounds on Saturday, August 15, the Blaine County 4-H Livestock Sale is in the books. According to on-site auctioneer Kevin Elias, sixty-five market animals were sold for a total price of $106,262.90.

"The sale went well. A lot of buyers were present in-person, along with 15 on the internet with Frontier Live...