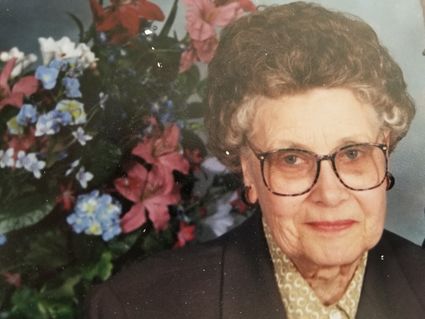 She was the daughter of John and Clara Skoyen who had moved from Wisconsin to the Chinook north county as early homesteaders. Lilah was the third of four children. She graduated from Chinook High School in 1945; worked as a bookkeeper for Doughten Ford Co. and the Robert Leeds MD clinic. During a summer picnic in Zurich park, she met a handsome young pharmacist named Frank Orlando of Havre MT. Frank and Lilah were married June 14, 1952 at St. Gabriel's Catholic Church in Chinook. They are parents to two children, Ronald (Karen) of Spokane, WA, and Patricia (Owen) of Grantsville, UT. Lilah, first and foremost, loved her family. She expressed her love and friendship through cooking and baking, her specialty being Norwegian pastries.

She loved animals and birds, gardening and playing bridge. Lilah performed civic duty as an election Judge for many years in Harlem. She was an active member of St. Thomas Catholic Church and Alter Society. After dad's death in 2014, she moved into The Little Rockies Retirement Center in Harlem. She served two years on the Advisory Board at the center. She is survived by six grandchildren, Courtney Martin (Donavan) of Vancouver, WA; Luke Orlando (Lynzie) of Spokane, WA; Peter Orlando of Renton, WA; Ian Orlando (Kelsey) of Coeur d'Alene, ID; Walter Allred (Daniela) of Kensington, MD; Ryan Allred of La Puente, CA; five beautiful great grandchildren, many nieces and nephews including John and Barb Skoyen who provided many many hours of love and specialty care for mom in her later years. Lilah is predeceased by husband Frank, two sisters, Myrtle Nelson and Pearl Lorenz, and brother Floyd Skoyen. The family wishes to express sincere appreciation for the friendships extended to mom while living at The Little Rockies Retirement Center; the many close community friends; the care and kindness provided by the nurses and staff at Sweet's Nursing Home. Due to COVID-19 concerns, a private family service is planned. Memorials may be sent to St. Thomas Alter Society, The Little Rockies Retirement Center or a charity of your choice.