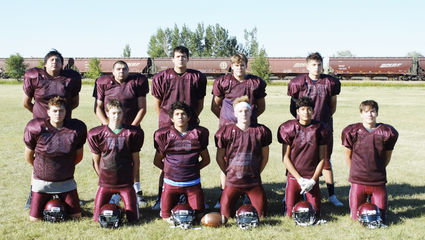 The Harlem Wildcat football team may be short on numbers but they are big on spirit. The 2020 Wildcats are led by Head Coach Derek Azure who's been hard at work preparing his team for the upcoming season.

Practice began a few weeks ago and the kids have been learning new concepts quickly. Azure is in his first year at the program with these kids and likes how things have gone so far, "Practices have gone well. Once everyone got over the covid scare and we got all of our safety precautions in place, things went smooth," said Azure.

Whenever a new coach takes over a program uncertainty of what to expect is bound to happen, but with this group Azure likes what he sees, "The ability for the kids to pick up new concepts and not struggle with them totally blew me away. I feel the football IQ of every player has risen ten fold."

Harlem has struggled on the grid iron for several years and Azure is determined to turn the program around. For that to happen anywhere it all starts with leadership. Azure has been impressed with a couple of players who have really stepped into that role, "Andrew Rasmussen and Mikkel Rider both have been huge in stepping up to lead the team.

The season will get underway this Friday when the Wildcats host the Poplar Indians and that is where Coach Azure and the Wildcat team goals begin, "First thing is to get to the first game as we already have so many things outside the field hindering us." Beyond the season opener the team has some lofty goals, "In the long run our goal is to put a competitive team on the field, night in and night out, something that hasn't happened with Harlem football in years."

New coach new system, 2020 and all its craziness, getting the kids ready for the season is a whole new challenge of its own, "The kids are ready and anxious, myself and my assistant are excited, and I am totally ready to bring an exciting style of football to Harlem. To create some actual buzz about our team in the community that hasn't been there in 30 years," concluded Azure.

The home/season opener September 4 will also be senior night for the Wildcats. Harlem moved the day to recognize their seniors to the first game of the season to ensure they would be honored. With the season essentially operating on a day to day pace, the idea has been adopted at schools across the Hi-line.

The Wildcats will hold their Homecoming the following week when they welcome the Wolf Point Wolves to town on September 11.

They will be in Glasgow September 25, and home to face Malta on October 2. They will then travel to Fairfield, October 9 to face the Eagles and close out the regular season with a home contest against Cut Bank, October 16 and a road trip to Conrad on October 23. Class B Playoffs will get underway on October 30.