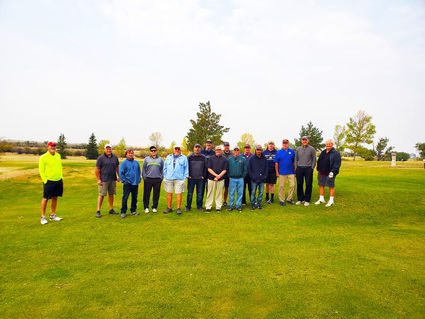 The 16 members of the Chinook Golf Club 2020 Ryder Cup team pose for a picture prior to the start of the 27 hole tournament against the Beaver Creek Golf Course from Havre. The Chinook Club needed 16.5 points to regain ownership of the traveling trophy and did just that winning the Cup 20-12.

The Chinook Golf and Country Club put the finishing touches on a abnormal season this past week. Wednesday saw the conclusion of the Mens and Womens Club Championships. Saturday was the annual Ryder Cup Team Tournament in which Chinook defeated Beaver Creek Golf Course 20-12 to regain the traveling trophy.

The Chinook Golf Club Men's and Women's championships were held over the course of two Wednesdays. The front nine was played on September 9 and the back nine September 16.

The Mens Championship featured four flights including a Championship, First, Second and Third. The Womans Division...