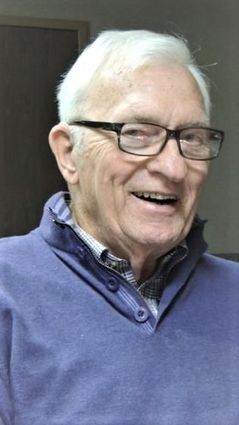 Long time Chinook resident, J.R. "Bob" Inman, 89, passed away September 15th, at the Sweet Memorial Nursing Home in Chinook, MT, one day before his 90th birthday. He is known as "Bud" to his siblings.

Dad was born to Harry Inman and Dorothy Thomas Inman September 16th, 1930 in Wolf Point, MT. He moved to Chinook with his family in 1944 where he spent the remainder of his life. When his parents moved elsewhere, he decided to stay in Chinook and was "adopted" by the P.O. Butler family. The Butlers treated him like a member of the family and he and JT became close friends.

He graduated from Chinook High School in 1948. While there he excelled in football and basketball. He was well known for his "hook' shot. Dad met the love of his life, Nancy Burgess, March 3, 1946 at a dance party. They were married July 25, 1947 in Fort Benton, MT and were married for almost 65 years prior to Nancy's passing. Their 10 children were all raised in Chinook.

The work ethic he instilled in his children began at a young age. Besides working on the Butler farm his freshman year in high school, he worked for the Conoco Service Station and Bulk Plant and continued to do so after graduation. Within a few years he knew everyone in town, as well as most of the farmers and ranchers in Blaine County, as he delivered fuel to many of them. In 1956 he bought the service station business from Kenneth McKinnie and it became known as Bob's Conoco. The Conoco business was sold and Dad went to work selling insurance and real estate for his father-in-law, Monte Burgess at Burgess Agency. In 1972 he purchased the agency from Monte continued selling insurance and real estate as Inman Insurance, Inc. specializing in farm/ranch sales and was a former president of Mutual Insurance Agents Association of Montana. Dad had many other business interests including B&B Auction, farming/ranching and secretary of several organizations including the Zurich Irrigation District, the Bear Paw Hereford Breeders Association and for 52 years as secretary of North Blaine County Grazing Districts in addition to being a director of Western Bank for 30 years.

During his many years in Chinook, he made his family proud supporting the community and the Sugarbeeters. He was active in the Lions Club, Blaine County Development, president of Eagles Lodge, Lions Club, Chamber of Commerce, Jaycees, Director and Treasure of Friends of the Bear Paw, Big Hole and Canyon Creek Battlefields to name a few. Dad and Mom were honored with a star quilt from the Aaniiih (Gros Venture) and Nakota (Assiniboine) tribes of Fort Belknap.

Dad loved people and people loved him. Family always came first. Friends were very important to him, as was the community of Chinook. He loved his Sugarbeeters! He was always there to pick you up when you fell, to give you a hug when you were hurting, no matter who you were. He never judged you. He made you laugh. He taught his children many of life's lessons and we are all better people for that. He had a smile for everyone, helping anyone in need. In his spare time he loved to garden, sharing whatever he grew with whoever was in need and he loved to go fishing with his son-in-law.

His faith was very important to him. He and Mom were lifetime members of St. Gabriel's Catholic Church and both were very active in the church.

Mom and Dad could be seen out walking nearly every morning brightening the day for others with a "good morning" greeting and smile. They participated in the C.O.S.I. caller program, calling elderly shut-ins to see if they needed help. They loved to visit the residents at the Sweet Memorial Nursing Home and when he lived there he continued to visit with everyone, residents and staff alike, cheering them up if they needed it and leaving them with a smile on their face.

Dad was laid to rest surrounded by his family on September 18th at Kuper Memorial Cemetery with his many grandsons acting as pallbearers. A Memorial Service\Celebration of Life will be held in the summer 2021. Funeral arrangements were entrusted to Wilderness Funeral Homes.

A special thank you to the staff at the Sweet Nursing Home for taking such great care of Dad.