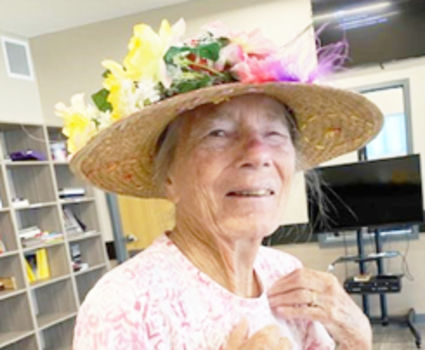 Betty Haldemann appears pleased with how her hat came to life with its flowers and other decorative elements.

Last month, residents at the Sweet Memorial Nursing Home (SMNH) celebrated the Kentucky Derby, remembered the fallen on Patriot Day, and spent ample time in the activity room as the temperatures began to drop with the onset of autumn.

In preparation for the Kentucky Derby, which took place on September 5 in Louisville, residents of the SMNH recreated the annual battle for the Derby's most eye-catching hat. Many of the ladies gathered to decorate hats in true derby style- to make a statement or to attract attention with flowers, ribbons, and beads. A few of the men played along, wearing cowboy hats or bowlers.

This was the 146th running of the Kentucky Derby, and it took place without any on-site fans. However, plenty of fans at the SMNH made ornate headwear the norm for the day. Although the majority of people go to the races to see the horses and to place bets, others go to see the hats. The extravagant hats that have become associated with the Kentucky Derby did not really manifest until the 1960s, when social fashion norms loosened up and the presence of television gave women a reason to stand out. With those social changes, the hats became larger, brighter, and more elaborate. 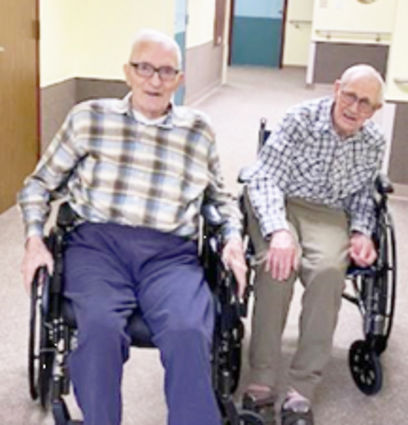 In September, Bob Inman and Swede Welsh meet up for dinner in the hallway outside the dining room. Unfortunately, Bob passed away on September 15, just one day before his 90th birthday.

On Patriot Day, September 11, the residents prepared and drank milkshakes and engaged in a patriotic sing-along.

The cooler days find more people spending time indoors, and true to that norm, at the Home the place to be was the activity room. Ward Clerk, Carla Uhl reported that with all the windows in the SMNH's activity area, many residents just relax in the space to visit, enjoy the sunshine, or peruse the magazine and book selections. Several also spend the afternoons assembling puzzles or drinking coffee while watching progress on the road construction.

Some of the planned visits by family members were postponed during the month as the COVID status in the facility and in Blaine County fluctuated. Personnel at SMNH remind any visitors that guidelines are in place to allow for limited indoor visits for friends and family members of residents at Sweet Home. After each scheduled visit, the space is thoroughly sanitized.