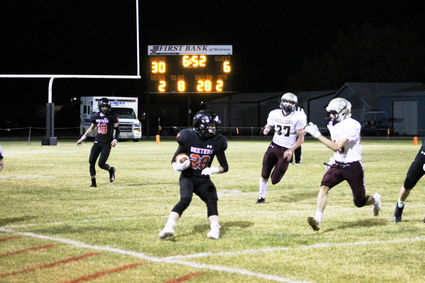 Chinook junior Drake Berreth looks for yards after the catch during the 'Beeters 60-28 home win over the Choteau Bulldogs Friday night. Berreth had a big game for the 'Beeters, catching six balls for 126 yards and a score.

The Chinook Sugarbeeters got back to winning this past Friday night as they welcomed the Choteau Bulldogs to town in the final regular season contest. The 'Beeters scored early and often, taking the visitors 60-28.

Facing a third and eleven, senior Quarterback Benton Elliot dropped back and found junior Drake Berreth on a quick hitter for a 53 yard completion all the way down to the Bulldog seventeen yard line. The very next play Elliot hit junior tailback Hunter Molyneaux on a screen pass for the touchdown. Senior Tight End Reese Elliot hauled in the conversion to put Chinook on top 8-0 with 11:07 still remaining in the first quarter.

Moments later the 'Beeters would get the ball back after a fumble recovery by junior Drake Berreth. Following a 22 yard pickup from sophomore runningback Tyler Schoen, Elliot found the end zone on a seven yard scamper. Schoen added the conversion and Chinook moved out to a 16-0 lead at the 5:16 mark of the first quarter.

Chinook closed out the opening stanza in fine fashion as Molyneaux found the end zone on a 22 yard run giving the 'Beeters a 22-0 advantage heading into the second quarter.

Leading 22-6 the 'Beeter offense was back on the field looking for more points. Molyneaux and Schoen gained three and four yards on first and second down but a procedure call pushed them back to their own 30. Elliot made a nifty move to pick up 10 yards.

On fourth down Schoen took the hand off from Elliot and bolted through the Bulldog line, veering off to the right and he didn't stop until he covered forty yards for another 'Beeter touchdown. Berreth added the conversion catch and Chinook's lead bulged to 30-6 with 9:37 left in the half.

Berreth has made some outstanding catches for the Sugarbeeters this season and his ability was again on display late in the half.

Berreth made a nifty move on the sideline to pick up 12 yards. He then added a nice 13 yard reception to move the ball to the Bulldog 25 yard line. Elliot dropped back in the pocket but with his receivers covered and a hole in the Bulldog line he took off for a 10 yard pickup.

The 'Beeter drive was capped off by Berreth as he hauled in a 10 yard pass from Elliot. Berreth then added the conversion giving Chinook a comfortable 38-6 lead with 5:14 left in the half.

Berreth then set the 'Beeters up in scoring position with another nice catch for a big gain. Schoen then found plenty of running room for a 33 yard touchdown. Senior Ethan MacLeod added the conversion run providing the 'Beeters final points of the half.

The 'Beeters and the Bulldogs headed to halftime with Chinook on top 46-14.

Both teams would add a couple of scores in the second half. Schoen would add another on the ground and sophomore quarterback Levi Jensen would score a touchdown of his own, capping a 60-28 home win.

Elliot finished 11-18 passing for 188 yards and three touchdown in the win. Elliot added another 46 yards and a score on the ground on seven carries.

Schoen carried 11 times for 87 yards and a pair of scores while Molyneaux added three carries for 32 yards and another touchdown.

Berreth led all receivers with six catches for 126 yards and a touchdown. He also hauled in a conversion pass and added another on the ground. He finished the game with 3 carries for 13 yards.

Head Coach Mike Jones was impressed with his teams effort against the Bulldogs Friday night, "I am really pleased with all the players that stepped up and played in the game. We saw great things from our starters. We came out and executed a game plan offensively and defensively." 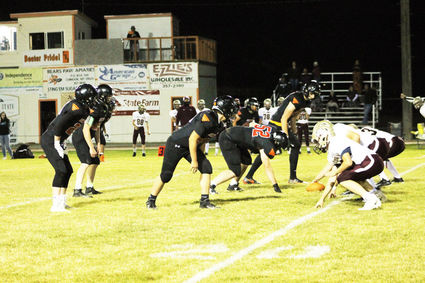 The 'Beeter defense was back in tack Friday against the Bulldogs. The unit played well start to finish and will look to continue to get stronger as the post season looms.

The team has come to understand their individual rolls on the team, "Our older kids had a great week of preparation and are clicking really well. Our young kids stepped up and we had some of them show us some good things this week," added Jones.

The 'Beeters improve to 4-2 on the season and now turn their attention to a Northern C Seeded play in game in Belt this Friday. "We have a big week and I think our leadership and our team is going to rise to the occasion of this week. We control our own destiny if we win we are in the playoffs," concluded Jones.

Should the Sugarbeeters beat the Huskies Friday they would qualify for the Montana Class C 8 Man Football Playoffs as the Northern C 3 or 4 seed ,depending on the outcome of the Simms versus Cascade game. A loss would have the 'Beeters playing the loser of that contest for the Northern C 5 Seed.