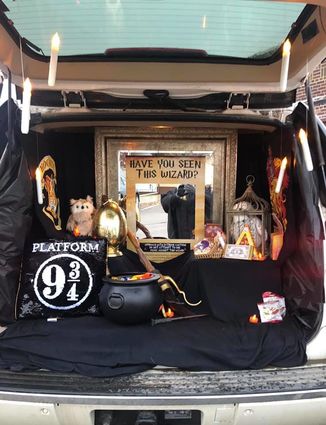 Last year, Julie Terry's car in the Trunk or Treat line-up featured a Harry Potter theme to draw the trick-or-treaters.

Trunk or Treat (ToT) is an event where individuals decorate the trunks or tailgates of their vehicles and hand out candy from a common location.

According to event organizer Julie Terry, the goal of ToT isn't to replace traditional trick or treating in Chinook. Instead, she envisions the event as an entertaining addition to the community's traditions.

"It's a fun, safe place to start or end your house-to-house trick or treating, as well as a really great-and safe-approach for smaller kids to trick or treat! It also provides a way for Halloween enthusiasts whose homes are in lower traffic or rural areas to participate in trick or treating activities. For example, I live in a less-travelled part of town, so I usually only see five to six trick-or-treaters. Because of our Trunk or Treat event last year, I got to see and visit with so many families! This social aspect made the evening very enjoyable."

When asked about the origin of the event, Terry said, "While I was living in North Dakota, I participated in our church's Trunk or Treat and had a great time, and I thought it would be a fun addition to our hometown festivities. So, a year ago, I reached out to the city about hosting an event on Main Street. Kadie Dahl, Maggie Lewis, and Crystal Huckabee helped me organize and plan the first event; we had sixteen cars participate. It was a terrific, well-attended event! A highlight for me was the participation of the city police and the fire department. So fun!"

With the COVID pandemic looming, Terry wasn't sure whether the event would be able to happen. However, the city agreed to the hosting of ToT again and offered to cordon off both the 400 and 500 blocks of Indiana Street to allow for more social distancing. "We also have plans to offer hand sanitizer, gloves for those who register a car, and other safety protocols in place to help ensure our event complies with current health guidelines," Terry reported.

Terry suggests that interested participants reserve their spots by completing a short registration form, which is available on Facebook. For those not on Facebook, reservations can also be made by sending participant's name, vehicle model, and phone number to ChinookTrunkorTreat@gmail.com. Pre-registration is required so that Chinook city crews can plan for how much of the street will need to be blocked. "The more the merrier," Terry stated.

Although decorations to one's car or "stall" can be as simple or as elaborate as a person would like, Terry does suggest that cars feature some form of Halloween or fall decor.

During the ToT festivities, the youth group-Jesus Uses Motivated People (JUMP)-will have a car in the lineup and will be serving hot chocolate to those who wish to warm their hands while savoring a sweet treat. Chrissy Downs, one of the group's leaders, reported that JUMP offered cocoa last year "and it was a huge hit!"