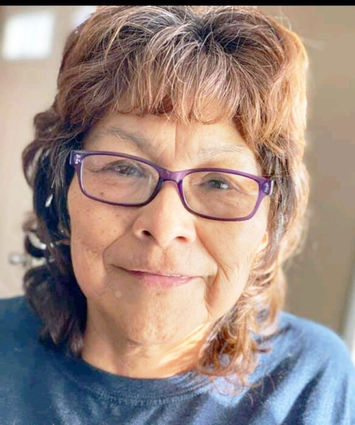 Carol "Puddy" LaVallie, Iron Woman, 65 passed away October 29, 2020 at Northern Montana Hospital from Covid 19. Visitation/viewing began at 8:00 pm on Sunday November 1, 2020 at the Wilderness Funeral Home in Chinook, MT. Graveside services was held at 11:00 am on Monday November 2, 2020 at the St. Paul Mission cemetery in Hays, MT. Wilderness Funeral Home has been entrusted with services and arrangements.

Puddy was born on June 8, 1955, in Fort Belknap, MT to Edward George LaVallie Jr. and Helen (WhiteCow) Talks Different. She was raised during her early years at old Hays with the help of her Grandmother Lena WhiteCow. Later moving to the Agency where she grew up. She married Waldo F. Plumage in the early 1970's from this union they bore two children Carolyn M. Plumage & Helena F. Plumage. Years later they divorced. She met Byron Paul YellowRobe Sr. from this union came Byron Paul YellowRobe Jr. Puddy enjoyed spending time with people and helping them in any way she could. She enjoyed her traditional ways and attending traditional ceremonies and events. She loved to exercise, clean, decorate, gardening, and most of all spending time with her children, grandchildren and great grand children. She loved her spent learning in college and earned multiple degrees in various fields. She worked as the administrative assistant at the Aaniiih Nakoda College, Fort Belknap CDC program, Courts, Domestic Violence, and took pride in each position she held. Her crowning achievement was her long time friendship with Bill W. they knew each other for more than 37 years.