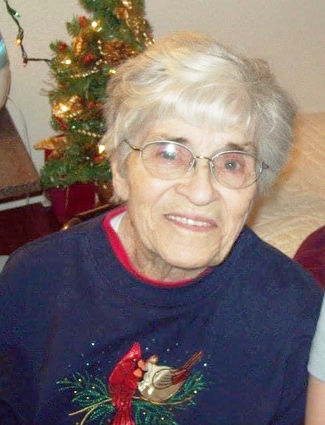 Evelyn Katherine Nielsen Hedstrom of Harlem, 93, passed away peacefully surrounded by her children while the beloved hymn "It Is Well With My Soul" was playing softly. She went into the loving arms of Jesus and her family and friends that have been waiting for her to join them in their heavenly home. Family viewing-Friday October 9 from 5-7 pm at the Wilderness Funeral Home in Chinook. Graveside service-Saturday October 10 at 1 pm at the Silverbow Cemetery in Hogeland. Memorials may be sent to the Harlem or Hogeland American Lutheran Church. We may have a Celebration of Life next Spring or Summer if the pandemic is over by then.

Evelyn was the daughter of Hans Peter "Pete" & Elizabeth (Schaack) Nielsen. She was born December 20, 1926 at the Sacred Heart Hospital in Havre. Her parents brought her home from the hospital traveling by train to Harlem and then by a horse drawn sled the 25 miles north to the farm, west of Hogeland. The farm was her home most of her life. She started school at West End School. In the 6th grade she went to the new school in Hogeland and had to travel by bus. She graduated from Hogeland High School in 1944. Evelyn's Mother passed away when Evelyn was 18 and she promised her Mother she would take care of her Dad. She kept her promise until he passed away at the age of 97.

On September 28, 1945 she married Al (Elvard) Hedstrom. They lived in Hogeland, then at the family Farm. They eventually purchased the farm from Evelyn's father in 1967. They raised five children; Rick, Elizabeth, Adele, Kris and Teresa. Evelyn helped with everything on the farm. She was a hard worker and many times when we sat down to eat, everything on the table was produced on the farm and her garden. They also drove school bus "temporarily" for 15 years for Harlem Public Schools. They retired when they were both 62 and sold the farm in 1994 and moved to Harlem. They also spent almost 20 winters in Mesa, AZ and had a wonderful circle of friends there. In April of 2008 they decided to sell their Arizona home and stay near their children, grandchildren and doctors. In 2015 Evelyn moved to the Ruby House in Gt. Falls with her roommate Adrienne Hutton.

Evelyn was always active in the American Lutheran Church in Montana and Arizona. She helped make many Lutheran World Relief quilts. She was a 4-H leader for many years and also helped with a MADD (Mother's Against Drunk Drivers) chapter in the area. She loved quilting, knitting, hardanger, and gardening (especially pansies). She loved to bake and cook for everyone and was famous for her doughnuts. She knew what everyone's favorite foods were and had them ready when we got there. She was quiet, stoic, practical, thoughtful and never complained. Even though she suffered more tragic losses than most people should in their lifetime, she had great faith in the Lord and spent much time in prayer and bible study. She had several Godchildren that were very special to her. Evelyn knew without a doubt that Jesus died on the cross so she could live. Through her prayers and example, her faithful legacy will live on for generations to come.