27 Swift Fox were Released in August on the Fort Belknap Indian Reservation, How Are They Doing? 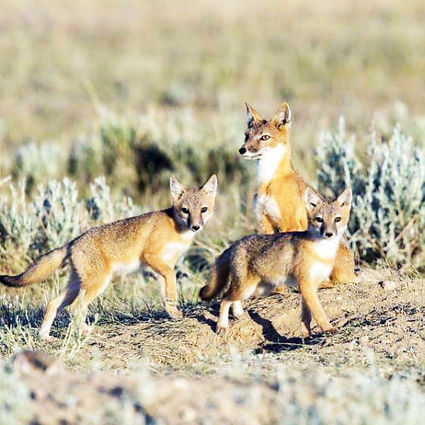 27 Swift Fox were released this summer on the Fort Belknap Indian Reservation as part of a larger reintroduction plan. Sightings have taken place and those who see these animals are being asked to report their sightings.

The Swift Fox once were very common throughout Montana and Southern Canada, but numbers quickly diminished significantly. This summer reintroduction plans to the Fort Belknap Indian Reservation began with the release of 27 Swift Fox.

The Fort Belknap Indian Reservation, just south of the Milk River in Blaine County has proven to be vital in providing critical habitat to some of Montana's treasured and rare species. Fort Belknap has a long history of holding this land in high value and has remained committed to maintaining habitat, protecting and preserving cultural values and helping to sustain and manage populations of these species.

Fort Belknap officials worked in conjunction with the Smithsonian Conservation Biology Institute and Defenders of Wildlife as well as a number of other groups developed a Swift Fox reintroduction program for the Reservation.

Fort Belknap Fish and Wildlife Director Harold Main (Jiggs), with the support of the Tribal Council, established a plan to reintroduce the Swift Fox to the Reservation through coordinated release efforts known as "translocations." The reintroduction began back in August under an approved COVID-19 safety protocol set by the Fort Belknap Tribal Council.

The reintroduction plan will take place over five years and will include 40-50 Swift Fox. The translocated animals will come from Wyoming, Colorado and Kansas to in hopes to establish a viable population on the Reservation.

Teri Harper, Outreach Liaison for the Smithsonian Biology Conservation Institute on Fort Belknap Indian Reservation for the Swift Fox reintroduction Project noted some early success of the reintroduction, "We released 27 foxes and have already had some sightings from community members, and we have named the first two foxes that have been sighted."

In an effort to better understand the movement of these animals and help document the progress of the reintroduction, Harper asks for help from the nearby communities, "We would like to get some more feedback from the outlining communities as these foxes are moving quite a distance."

Prior to the start of any reintroduction taking place, several steps were taken to determine it the reintroduction was feasible. The Department and Smithsonian scientists followed IUCN guidelines to make this determination. A visual inspection of entire landscape was made to make sure that there is enough food and habitat for them to live.

Swift Fox tend to favor flat landscapes with short-grasses and soils that can be easily dug for burrows to be used use for shelter.

Studies led to scientific belief that the land was suitable and expert advice was sought on how many foxes we would need to release each year in order to ensure a healthy population.

Upon conclusion of this extensive process the department and the conservation groups presented the results to a group of Swift Fox experts, including wildlife biologists, researchers, representatives from American Indian tribes, Bureau of Indian Affairs, state and federal agencies and local NGOs. After a thorough discussion of the research results, the Department moved forward to set the reintroduction plan, goals and budget.

The result of this project successfully saw 2020 become the first year of this reintroduction effort. The Department and its partners will trap 40 Swift Fox from the state of Wyoming to be release on tribal lands. The Fort Belknap Fish and Wildlife Department continues to seek the communities help in an effort to monitor these Swift Fox to help ensure this project become a success.

Earlier efforts to reintroduce the Black-Footed Ferret reintroduction, now established on Snake Butte, have proven that success is possible and that is what the goal is for the Swift Fox.

The Swift Fox is a small carnivore that roamed the prairie of the great plains and once thrived in the grassy environment. About the size of a small housecat, their diet consists of small rodents and rabbits, insects, birds and dead animals. The Swift Fox was prominent in the 1800's roaming lands from southern Alberta and Saskatchewan in Canada, south to the northwestern parts of Texas. They could also be found in New Mexico, Oklahoma, Colorado, Kansas, Nebraska, Wyoming, most of South and North Dakota as well as Eastern Montana.

The Swift Fox was officially designated as endangered in Canada in 1978 and received a similar designation in the United States in 1992. The Swift Fox Conservation Team (SFCT) was formed in 1994 and included 10 state wildlife agencies, including Montana Fish, Wildlife and Parks as well as other interested cooperators. The goal of the SFCT was to develop a Conservation Assessment Strategy, which was completed in 1997.

In the years since several reintroductions have occurred in the Swift Fox's former habitat beginning with the first and largest introduction in southern Canada along the border with north central Montana with nearly 1,000 captive bred animals being reintroduced between 1983-1997. In 1998 and continuing through 2002 a total of 123 Swift Fox was reintroduced on the Blackfeet Indian Reservation. A third reintroduction occurred later at the Fort Peck Indian Reservation where 60 foxes were released from 2006-2010. In addition, other reintroductions have occurred in in states to the south and east of Montana including western South Dakota at the Bad River Ranches between 2002-2007, the Badlands National Park, the Lower Brule Reservation and the Pine Ridge Reservation.

Currently the Swift Fox has been successfully reintroduced to 40% of its former range. Swift Fox are now having significant populations in two areas of their historical range. First a southern population in Texas, New Mexico, Oklahoma, Colorado, Kansas, Nebraska, Wyoming and South Dakota. The second being a northern, reintroduced population, in Montana, Alberta and Saskatchewan. These two groups of native and reintroduced Swift Fox populations are separated by a gap in their new territory. The former range still uninhabited occurs largely in southeastern and east-central Montana.