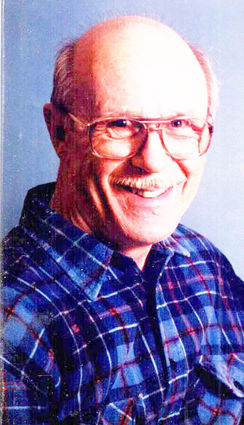 Larry Keith McMullin passed away quietly on Friday, November 6, 2020 in Bountiful, Utah. He was born February 25, 1934 to Keith Stanley McMullin and Rosa Blendina Crain McMullin in Idaho Falls, Idaho. He was a kind and thoughtful big brother to his two younger sisters while growing up in the small town of Chinook, Montana. It was a golden era with the whole town as his playground.

Larry never reached taller than 5'4-1/2 inches tall, but his love of sports and fighting spirit was 8 feet tall. He played baseball as pitcher, football as running back, and basketball in Chinook, Montana, and was also active in dramatic productions. He attended Boys State and a Boy Scout Jamboree at Valley Forge. He played the accordion and sang with choral groups as well. As Chinook's paper boy, Larry made many friends among the elderly and often had candy or bubble gum to share with his sisters, even during the war years before the end of WWII. His faithful dog, Streak, was a constant companion on those cold winter mornings as he delivered the paper in snow, rain, or early sunshine. He learned early the value of work.

Larry went on to graduate from BYU Provo with a Bachelor's Degree in business and served his country during the Korean Conflict in the United States Army. He met the girl of his dreams, Deanna Choules, at BYU and they were sealed for eternity in the Salt Lake Temple on November 21, 1958. They had three sons: Kay Lynn, Terry Scott, and George Keith. An infant daughter, Denise, died shortly after birth. Larry worked at Utah-Idaho Sugar Company, Ling-Tempco-Vought, Thiokol, and the Boeing Company as a cost analyst retiring from Boeing. The family lived in Moses Lake, WA; Midvale, UT; Grand Prairie, TX; Brigham City, UT; and Maple Valley, WA. The last few years have been spent in South Ogden. From there he and his wife left on a mission to the Denver East Mission...a highlight of their life.

Larry loved his high school years and returning to Chinook for high school reunions. He enjoyed fishing with his cousins, hunting, camping and sports (especially watching soccer) with his boys and grandkids. He was a master tease. He is survived by his children: Kay Lynn, George Keith (Crystal); daughter-in-law Tina; sister Rosa Lynn Meservy (Jay); 12 grandchildren and 26 great-grandchildren. He is preceded in death by his parents; wife, Deanna; daughter, Denise; son, Terry Scott; and sister, Sharon Kay McMullin.

Condolences may be shared at: http://www.lindquistmortuary.com.