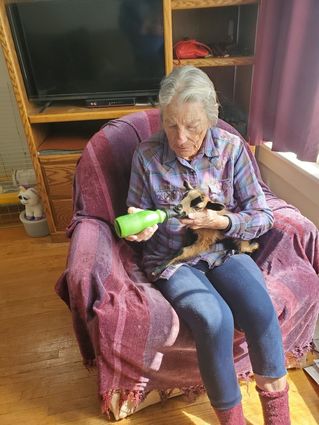 Elizabeth (Betty) Hordyk – Visbeek- Haldemann passed away Saturday, November 14, 2020 from complications of respiratory failure at the age of 91 at Sweet Memorial Nursing Home in Chinook, Montana.

Betty was born on May 30, 1929 in Coupeville, Whidbey Island, Washington. She grew up on a dairy farm and attended schools in Oak Harbor on Whidbey Island. Following high school, she went to The Reformed Bible Institute in Grand Rapids, Michigan where she met her first husband, Clarence (Jack) Visbeek. They were married in Lynden, Washington in June of 1953 and had 5 children. Jack passed away in a tragic car accident in 1968.

On June 9, 1984, she married John Haldemann of Chinook, Montana and enjoyed over 35 years of marriage to her “rancher.” Together, they raised 3 children.

Betty loved animals, and any visit to the ranch was greeted by guinea hens, ducks, chickens, bunnies, goats, sheep, dogs, cats, horses, and of course their livelihood, cattle. She even domesticated a buck deer, tied caution tape around its horns to protect it from hunters. She loved growing things in her garden and living under “the wild Montana sky.”

Betty loved her neighbors and loved her community, especially the churches she attended, Chinook Assembly and later the Cowboy Prairie Church that met in Cleveland. She loved singing and socializing as praising God as a community of faith was so important to her.

Betty is survived by her husband John, daughter Alba, and son Dale (Pam) Haldemann. She also leaves behind her sons James (Janet) and Joseph “Todd” Visbeek, and daughters Terri (Jake) Schuler and Nomi (Frank) Albano, all in Washington State. She has, by her count, 13 grandchildren, 26 great grand children, and 1 great, great, grandchild. She also leaves sisters Johanna Roosma, Metdy Shutt, and brother Henry Hordyk as well as multiple nieces and nephews.

Preceding Betty in death were her parents, Henry and Maria Hordyk, husband Jack Visbeek, and sons Lloyd Visbeek and Johnnie Haldemann as well as sisters Tena Rylersdaam and Corrie Hordyk.

In lieu of flowers, memorials can be made to a ministry that was dear to Betty’s heart, through which she served many poor people on various mission trips: Echo Ministries of Yuma, Arizona. 13347 E. 37th St. Yuma, AZ 85367 or the local church music ministry at Chinook Assembly in Chinook, MT. Prairie Cowboy Church in Cleveland or Victory Christian Fellowship, Lynden, WA.