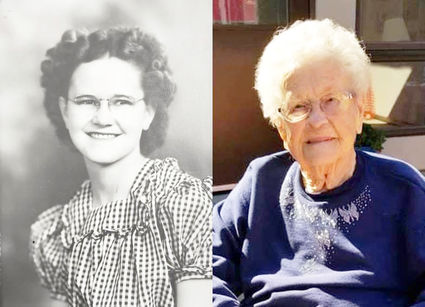 Thanksgiving morning, November 26, 2020, Betty Gilbert, rejoined the love of her life, Kenny Gilbert, just in time for their 73rd wedding anniversary. Our sadness at her passing is tempered by our happiness that Betty and Kenny are together again, holding hands, and loving each other as they did on this earth.

Betty Elizabeth Gloyne Fitzsimmons Gilbert was born on April 3, 1929, in Harlem, to Elizabeth "Lib" Gloyne (Fitzsimmons) and Marshall D. Snider. She joined brother Burton Melvin Fitzsimmons, Sr., who was two years her senior. Betty was adopted by her stepfather, George Fitzsimmons, in 1946, with half-siblings, Mary and Bill, rounding out the family. It was discovered during Betty's adoption, that a mid-wife assisting with her birth, registered her name as "Gertrude Louise" on the birth certificate. Her name was officially amended to reflect the name she had gone by for the prior 17 years, Betty Elizabeth.

Betty graduated from Harlem High School in 1947. She and Kenny were married on November 30, 1947, and raised four children, Karen, Keila, John, and Jim. Kenny worked several jobs in the Chester area, eventually opening his own auto parts store in 1960, with Betty's support. Betty's skills and characteristics were complimentary to Kenny's and together they built a successful business, retiring and selling their store in 1996.

In retirement Betty and Kenny ventured out in their motorhome, traveling the West on expeditions of their own, and with the Milk River Good Sam Club. For several years Betty participated in bowling leagues and enjoyed creating ceramics with a group of close friends. Betty and Kenny were members of the St. Mary's Catholic Church in Chester, and the Queen of Peace Church in Quartzsite, Arizona, where they were snowbirds for many years.

Betty was a survivor, enduring a challenging childhood, multiple bouts with cancer, the death of her son, John, and the death of her beloved Kenny. She was stubborn and could hold a grudge like no other, both manifestations of her fierce loyalty and love for her family and friends. Betty may not have shown love in the traditional huggy/kissy ways, but she was a champion for fairness and opportunity, striving to ensure her kids were treated equally, and were given opportunities she and Kenny did not have. Betty was adamant about always telling the truth and taught her family to do the same. She was intensely proud of her husband, her children, grandchildren, and great grandchildren.

Although Betty never knew her birth father, she was able to connect with many of the Snider family members, beginning in 1999. This connection was a pivotal moment in her life, bringing peace, joy, and acceptance that helped heal a wound she had harbored since childhood. Betty's family would like to thank the Snider family for welcoming Betty into their family and filling that void in her heart.

A Celebration of Life service will be scheduled for Spring of 2021.

Condolences can be made to Betty's memorial page at http://www.asperfh.com.