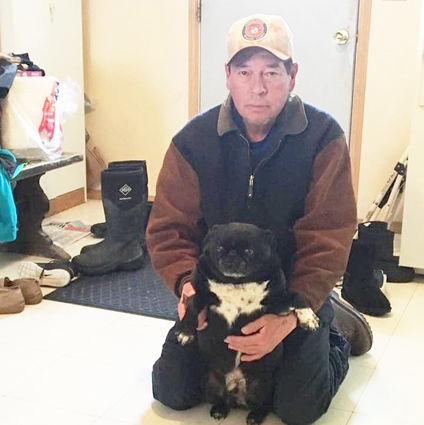 Cecil James "Bud" Fox passed away December 11, 2020 at his home in Hays, Montana. Cecil was born on June 28, 1958 to Leona Jones Fox and Stephen Fox Sr. at Fort Belknap Hospital. Cecil attended elementary school at St. Paul's Mission and Hays and graduated from Harlem High School in 1976. Cecil spent his summers working on his family ranch along with his brothers, bailing hay, herding cows and riding horses. While attending school in Harlem, Cecil excelled in athletics. He was all conference in football, basketball and placed third in the pole vault at the State B track meet. Cecil still holds the pole vault record for the Wildcats. When Harlem took 3rd place at the State B basketball tournament, he made the all-tourney team for his defensive effort in holding the opponent's leading scorer to four points in the consolation game.

After high school, Cecil joined the Marine Corps and did his bootcamp at MCRD in San Diego. He was stationed in South Carolina, Camp Pendleton, Okinawa, and Korea. He excelled in the physical fitness and marksmanship tests and took great pride in being a Marine.

Cecil married his high school sweetheart Kathryn Funke Fox in 1981. Out of this union three children were born; Cicely, Rick and Maria.

After completing his Marine Corps service, Cecil attended Eastern Montana College and graduated with a BS degree in Human Services. He worked at the Yellowstone Boys Ranch as a Counselor and the Billings Public Schools as a tutor. Later on, Cecil worked for the Bureau of Land Management and was a wildland firefighter for many years. He was a hard worker who loved working outdoors cutting firewood, working on the yard and keeping the Hays community clean. Cecil also helped his uncle Prince Brockie with his cows and whatever work needed to be done. He enjoyed watching history documentaries, westerns and classic tv shows.

He was known for his quick comebacks and dry wit. He was one of the best story tellers around.

He was preceded in death by his parents, Steve and Leona, Brother William "Billy" Fox, unborn twin child and his niece Leah Fox, as well as his beloved dog/companion, Bruiser Fox. Extended families are Jones, Brockies, Bradley's and all his Fox relatives.

One Last Ooh Raw for this Marine.