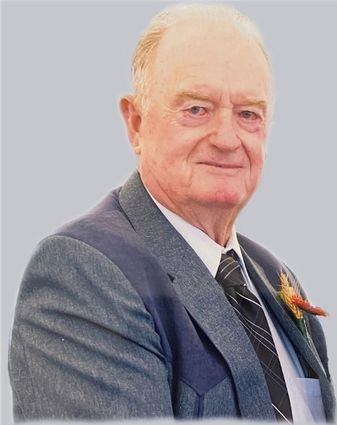 William "Bill" Hake, 88, passed away December 8th, at his home, surrounded by loved ones, after a short battle with cancer. Bill was born December 10, 1931 to William Hake Sr. & Ruth (Rigg) Hake in Osborne, Kansas. Bill's grade school years were spent in Colorado, where his dad worked many different construction jobs until he was inducted into the Navy. After his dad was discharged from the Navy, the family moved to Lenora, Kansas. While attending school in Lenora, he met his lifelong friend Dee Shoemaker. Upon completion of high school Bill joined a harvest crew, which brought him north to Highwood, Montana. While in Highwood, he met his first love, Marie Bach. Bill & Marie were married September 12, 1952. From this union, 4 children were born; Donna, Jim, Ed, & Judy. The family resided in Shelby, Montana where Bill worked numerous jobs to support the family. They then moved to Billings & Bozeman for a short time. From there they moved to the Gallatin Canyon area & purchased the Almart Lodge. Bill & Marie managed a café, rental cabins, & a gas station. Bill's most enjoyable part of living in the Gallatin Canyon was getting to put his passion for snowmobiling to use while guiding. He was given the opportunity to guide the CEO of Artic Cat in making a 30-minute advertising movie. In his later years, Bill continued to enjoy sharing his passion for snowmobiling in the Gallatin Canyon with family & friends. After a long battle with breast cancer, Bill's wife, Marie passed away in 1988. As years passed, Bill reunited with a lifelong friend, Mary Petrie. It wasn't long until Bill asked his lifelong friend Mary for her hand in marriage. The two were married at Soldiers Chapel, in Big Sky, on June 12, 1993. Bill & Mary have resided in Turner, MT for the past 27 years. Bill & Mary enjoyed many trips together, including cruises to Mexico & Alaska, multiple fishing trips, & numerous other adventures. During his time in Turner, Bill served the community by becoming an EMT. This certification provided him the opportunity to help give back to his community & work on forest fire crews. He enjoyed cooking for crowds, canning, the perfection of jelly making, tying fly-fishing flies, helping neighbors, & giving Mario Andretti a run for his money. Bill loved teasing his grandkids & cherished spending time with family. Bill quoted, "I have made many different moves in my life, but here in Turner, where I write this, I am totally content. Mary is a perfect partner, the family I inherited with her are closer than blood & the friends I have made are all top notch. This couldn't happen anywhere but in a small town like Turner." Bill is survived by his loving wife Mary; son Ed (Kathy) Hake of Big Sky; daughter Judy Hake of Hamilton; daughter-in-law Lisa Hake of Gallatin Gateway; step daughters Lela Kaiser of Havre, & Betty (Ramsey) Offerdahl of Conrad; step son-in-law Loren (Linda) Wolery of Turner; siblings, Marvel Pierce of Tracy, California, & John (Sharon) Hake of Olathe, Kansas; brother in-laws, Joe Bach of Fort Benton, Domingo Vasquez of Orlando, Florida, & Steve (Shirley) Bebich of Shelby; numerous grandchildren, great grandchildren, great great grandchildren, nieces, & nephews. Bill was preceded in death by his parents William Sr. & Ruth (Rigg) Hake; first wife Marie Hake; daughter Donna Harbers; son Jim Hake; step daughter Mary Ann Wolery; & sisters Elizabeth Gearhart, Caroline Hunter, & Linda Christensen. Services were held Saturday, December 12, 2020 @ 1:00 at the Turner Christian Church. A burial took place at 2:00 at the Turner Cemetery. In lieu of flowers, memorials may be given to Bear Paw Hospice 30 13th St. Havre, MT 59501, the Turner Christian Church 1335 Swenson Rd Turner, MT 59542, or the charity of ones choice.