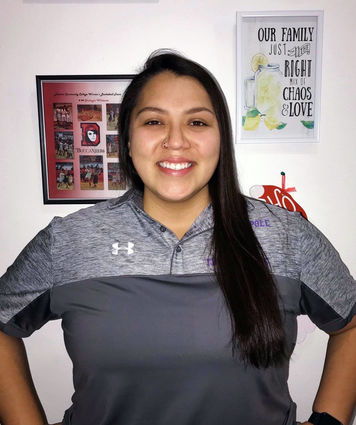 2013 Hays/Lodge Pole graduate Shakayla Whitecow is set to take over as head coach of the Thunderbird boys basketball program.

After a three week delay to the start of the Montana High School winter sports season, practices have begun and the first competition is right around the corner.

Boys and girls basketball teams in Chinook, Harlem, Hays/Lodge Pole and Turner as well as wrestling teams in Chinook and Harlem held their first practice on Monday, December 7. Teams will have to wait until after the new year to compete for the first time.

The Blaine County Journal News ~ Opinion looks forward to publishing our annual Winter Sports Preview in the December 30 issue. The preview will include complete up to date schedules after revisions have been made due to the delayed start. We will look at each team individually, list rosters and include comments from the coaches about the up coming season for their respective team.

This week we would like to introduce those coaches that will be mentoring the local teams. There are plenty of familiar faces, but there are some new ones as well.

We begin with the Hays Lodge Pole Thunderbird Boys basketball program. The Thunderbirds were in search of a new head coach following the resignation of Derrick Shambo earlier this year. That position will be filled by Shakayla Whitecow, a former standout for the Thunderbirds.

Whitecow had tremendous success during her playing days at Hays/Lodge Pole. A District 9C All-Conference performer, Whitecow was more than efficient and could play all five positions with ease. After graduating from Hays/Lodge Pole in 2013, Whitecow went on to play collegiately for the Dawson Community College Buccaneers.

"I'm excited to be coaching Hays (Lodge Pole) boys this year," said Whitecow. "I was nervous but that's changed now. It'll be a work in progress but I'm optimistic to see what happens, especially since there's a pandemic happening. It's crazy."

Through her experience gained while playing on the hardwood herself she understands what will be required to be successful, "My coaching philosophy is helping my players see the bigger picture, coaching the mind and body. Mental health is just as important as the fundamentals."

During her playing days for the Thunderbirds, her coach was Corey Morgan. Corey is still the Head Coach for the Girls basketball team at Hays/Lodge Pole, and is someone Shakayla can turn to, "Having Corey for support is huge, as I do have lots to learn. I feel comfortable and welcomed and he has always been there for me, all through my high school career, both on and off the court. We're both on the same page for this program and I think good things are going to happen for us," said Whitecow. "My coaches at Dawson have had a huge impact as well and kind of gave me that extra push to take this job."

While this may be her first foray into leading a high school varsity program, she is grounded in her approach, "I know I don't know everything, but feel like I know just enough to compete." In a effort to identify other women to be the head coach of a boys varsity basketball team in the Northern B or Northern C, one couldn't be found, suggesting that Shakayla Whitecow may just be the first.

In Chinook the boys basketball team will again be under the direction of Head Coach Mike Seymour. Now in his tenth season at the helm, Seymour is one of the most successful coaches in school history. He is assisted this season by Chad Jones and Taliik Ross. Jones has been a long time assistant for the 'Beeters and Ross is in his first year. Ross, from Orange Park, Florida, plays college ball at Calgary but became available after their season was canceled due to Covid-19.

The 'Beeter girls will again be led by Mike Jones, now in his second year at the helm. 2017 Chinook High School graduate Brooke Elliot and Tammy Schoen will be Assistant Coaches for the girls. Schoen has been an assistant previously and coaches the Junior High 'Beeter girls. This will be Elliot's first year on the bench

The 'Beeter Wrestling program will be led by longtime mentors, Co-Head Coaches Perry Miller and Adam Tilleman. The duo have been guiding the program for decades with great success.

The Harlem girls will have a familiar face back at the helm. Laramie Schwenke is back on the bench to lead the Lady Cats. Schwenke has been instrumental in laying the foundation for the Lady Cats success in recent years.

Schwenke turned a team struggling to find wins into contenders in her first stint as head coach in Harlem, but stepped down only to later become the Wildcats Athletic Director. Her assistant, Marlin Lawrence took over the program the past two seasons, but has since chosen to follow his daughter L'Tia as she plays for the MSU-Northern Skylights. Brandon Trottier will be the Lady Cats assistant coach. The Harlem boys will once again be led by Head Coach Geno LeValdo and Assistant Coach Ben Carrywater.

The Wildcat wrestling program will be under the direction of Jon Baker. The Wildcat wrestling room is very familiar with Baker as he has been involved with the program for years and was as an assistant to Lyle Faulkinberry and Joe Shupe in recent years. William Blackcrow will be the assistant coach this winter.

The Turner Tornadoes return both boys and girls coaches to the bench. Julie Welsh will lead the girls for the third year with Darcy Ammen again serving as her assistant. The boys will be led by second year coach Dylan Welsh with Jo Brown serving as the assistant coach.