"Rock writer" on the prairie: The rest of the story 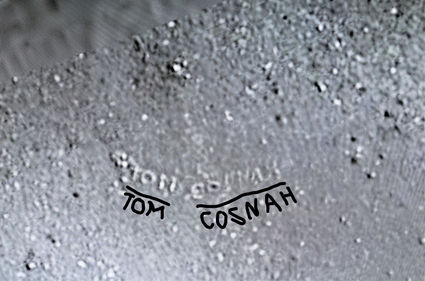 The rock writing of the name "Tom Cosnah" is large enough to be seen on this image from the Google Earth mapping satellite. Research identified Thomas Gosnah as a homesteader in the Paradise Valley east of Chinook who likely did the rock writing. It's not clear if the original letter "G" was purposefully modified to look like the letter "C" or if the disturbance was inadvertent.

Alert readers may recall a story that ran in the October 7, 2020 issue of the "Journal" about some unusual "rock writings." On the family ranch south of Chinook, Mark Burkhartsmeyer found a hilltop with several sets of initials fashioned with random stones. Of particular interest was a complete first and last name spelled out with stones about the size of footballs. As best could be determined the name laid out with stones was "Tom Cosnah."

Mark asked me if I would be interested in doing a story about the unusual 'rock writings.' I asked Mark what he would like to know and he said, "I would...